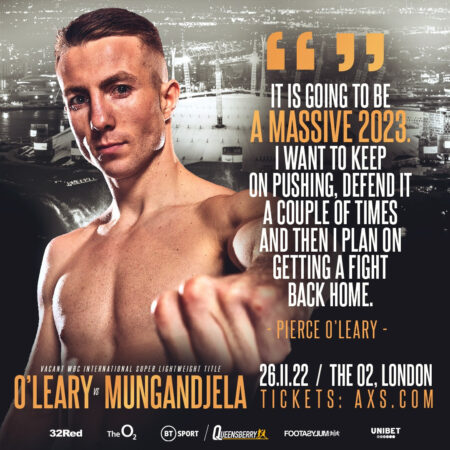 The big bang, Pierce O’Leary fights for the first of what he firmly believes will be many title belts when he goes for the coveted WBC International super lightweight title at The 02 on 26 November, live on BT Sport.

“I’m straight in for a big title,” said the 22-year-old Dubliner. “In my first fight for Frank Warren I was going to fight for the WBC Youth title but it was hard to get an opponent under 23 so I said to skip it and then go for the big one – and it’s only going to get bigger and bigger!”

O’Leary’s personal scouting mission of his Namibian opponent only amounted to a matter of seconds, but he will be aware that Mungandjela holds a record of 16-3-1 (7 KOs) and that he is on a 14-fight winning streak, with his three losses and a draw coming in the early stage of his career.

“I was given a film of one of my opponent’s fights to have a look at, but it went the distance, so I only watched 10 seconds of it and that was it, enough for me.

“At the end of the day, fighters bring different stuff on the night, so it is about being a champion, proving myself on the night and adapting.”

The Queensberry debut O’Leary referred to came against the confident Nicaraguan Robin Zamora, who was brutally poleaxed in the second round at the Copper Box on an occasion he relished after finally finding himself on the big stage.

“It was amazing, but I found him a bit tricky at the start. I knew it was eight rounds and I would catch him, as soon as his feet got slow and that would be it. I switched southpaw, started to adapt a bit better because I go southpaw in the gym against Henry Turner for the whole thing. It is my trick, I am like the matrix and I can do it all. It is just a matter of timing in the ring and I’ve got to be patient.

“He wanted to win and ruin my career. I wasn’t going to let that happen so I had to go in, suss him out for the first round and for the second round Al told me to put the gas on, so that is what I went out and done,” he recalled, before paying tribute to the army of fans who travelled over to support him in London in numbers that a local fighter would be proud of.

“Yeah, I’ve got a really big fanbase, an incredible one, and without them it is impossible. You hear them when you are walking out and it gives you a spur. If you weren’t excited before you are when you get boosted by them and I think I am here for them and here to put a big statement in.

“Without them, what is boxing? They are all friends, friends of friends and friends of family. Where I come from, if someone is doing good, one household getting behind you leads to another one and another one and they all come along at a certain stage. I will sell a lot of tickets for this fight.

“Boxing is huge in Ireland and it could even be the top one out of all sports. It has always been right up there, especially when the Olympics is going on. They love the amateurs, love it, but not me though as I wanted to get out of it!”

Should O’Leary, as he anticipates, end this year as the proud owner of a shiny green WBC belt, he is quite clear as to where he would like 2023 to take him. And that is homeward bound.

“It is going to be a massive 2023. I want to keep on pushing, defend it a couple of times and then I plan on getting a fight back home. We deserve a fight back home in Dublin for the fans because there are so many people who come over here and spend a fortune on tickets, flights, hotels and spending money.

“A fight back home is what we need. Maybe the 3 Arena, or if it is going to be a welcome home fight, perhaps something smaller, but the 3 Arena for a major title. It is easily done.”

Tickets for Zach Parker vs John Ryder for the WBO Interim Super-Middleweight Championship on 26 November at The O2 are on sale now, available from axs.com.