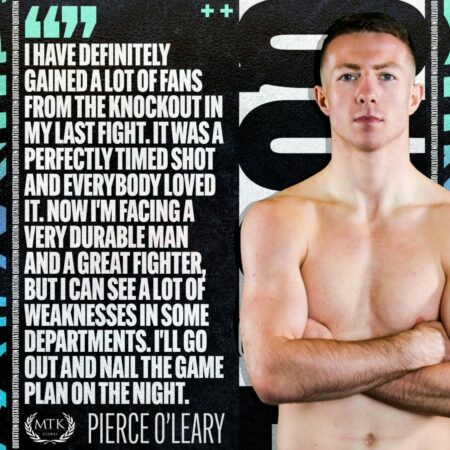 Pierce O’Leary has vowed to exploit the weaknesses of Siar Ozgul when the two men meet on Friday’s huge #MTKFightNight at York Hall in London.

This week’s action-packed card will be broadcast live in the US on ESPN+ in association with Top Rank and worldwide on IFL TV, and is headlined by a WBO Global super-featherweight title fight between Archie Sharp (20-0, 9 KOs) and Alexis Boureima Kabore (28-4, 7 KOs).

Undefeated Dublin ace O’Leary (7-0, 3 KOs) is back after his Knockout of the Year contender against Jan Marsalek in June, and the 21-year-old is relishing his step up in competition as he prepares to face former Southern Area champion Ozgul (15-6, 3 KOs) later this week.

O’Leary said: “I’m delighted to be back out on Friday on a great bill, especially in an iconic arena. A lot of boxers who have fought there have gone on to become household names.

“Siar Ozgul is a great fighter. He’s been in with big names and he’s exciting. I can see a lot of weaknesses in some departments, but I won’t let them out as I’ll keep it for our team, and I’ll keep working my style to open them up.

“He’s a very durable man, so I won’t look for specifically the stoppage. If it come it comes, and whatever the game plan is for me on the night, I’ll go out and nail it.

“Training has been fantastic. It’s been a short camp compared to my previous two fights which were both three months due to small setbacks, but I’ve been in camp seven weeks this time and never felt any better. I’m in tip top shape and I’m peaking at the right time. so for me now it’s just about holding back the reins not to overdo it.

“I have three of my teammates on the same bill too which is quality. We’ve all been pushing each other and the vibes are great. Everyone is happy and excited so we’re all ready to perform.

“I definitely have gained a lot of new fans from the knockout in my last fight. It was a perfectly timed shot and everyone loved it. Fans can expect a great masterclass of boxing from me again on Friday. I’m buzzing to show them what I’m all about.

“For me now it is all about learning and my development as a fighter through the rounds as I look to keep climbing the ranks.”