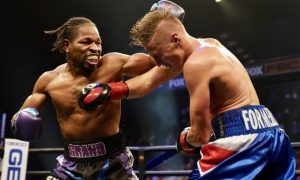 Without an audience withe the COVID-19 restrictions in place, he two-time former welterweight world champion Porter mauled the previously unbeaten Formella who had no answer for Porter’s work rate. Scores were 120-108, 120-108, 120-108.

“He was a tough fighter,” said Porter. “After about six rounds my dad told me that he’s going to keep taking these punches, so I just needed to keep the pressure on him…I’m still here and I’m not going anywhere.”

The 6’6 unbeaten Fundora was in control from the start all the way with referee Ray Corona stepping in to save Gallimore at 1:28 from further punishment.

“There’s no telling what they’ll see from me in a rematch,” said Porter on Danny Garcia and Errol Spence Jr. “I think both guys can also make adjustments. That’s what makes rematches so great, the fans have seen what both of you can do and they want to see who will make the right adjustments. I definitely think that I will be a little different against either guy.”

Porter stated on his win over Formella, “The game plan was to use finesse and subtlety. I went in there looking for the shot and ready to take the openings. I wanted to be aggressive, but not too aggressive, because we knew he would run. We worked on cutting off the ring and I think it all worked out tonight.

“For me it made sense to fight up on my toes. It’s a different type of rhythm and a lot of guys don’t know when I’m coming and going. I think it mixed things up for Formella tonight. We worked on fast jabs, powerful jabs, directing the jab and today he couldn’t tell which one was coming. I was popping his head back and of course also going to the body.

“We had a lot of film on Formella. I knew that his focus would be on his feet and when it wasn’t the feet, he would be covering up. I could tell his corner was telling him to punch with me or right after me, so he connected on me that way. I had to get on a different rhythm for him. He was able to play some chess and he did well. My dad always says that the mind controls everything. I think he had his mind made up that he was going to take everything and go 12 rounds. His body followed his mind tonight.

“We definitely worked on throwing the overhand right for this fight. We worked on our power a lot and in the beginning I wanted to land that overhand right. I was really keyed in on that. My dad said to stick to the speed and that would set up the power. I switched it up to straight rights to the body because that’s more of a speed punch.”