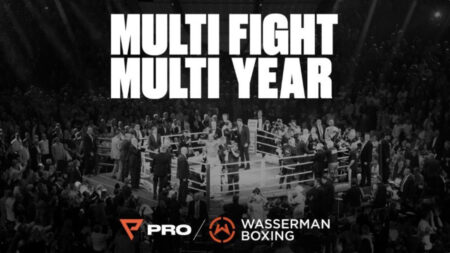 The historic partnership between the two boxing giants will see a number of high-profile events take place in Germany, with the first scheduled for December 3, while further dates are also planned for Berlin in February and Cologne in May.

It means that several spectacular cards will be held in the region, giving fantastic opportunities to German boxers at home and on the international stage, while major stars from around the globe will also be given the chance to compete in Germany.

Team Sauerland was founded in 1978 by Hall of Fame legend Wilfried Sauerland and is currently led by brothers Kalle & Nisse Sauerland. They have promoted more than 50 world champions and have broken box office records in Europe, Asia, Africa, the US and Latin America.

The partnership between Probellum and Wasserman Boxing is the latest step in Probellum’s goal to promote the best and biggest fights around the world, regardless of promotional affiliation. Probellum aims to end the fragmentation between rival promoters and distribution platforms, in order to empower fighters and galvanize a global fanbase, whilst investing heavily in grassroots boxing.

“We are super excited to bring such a strong international partner to Germany,” said Kalle Sauerland, Head of Global Boxing at Wasserman. “It’s amazing news for all the Wasserman Boxing fighters and German boxing fans. Many boxers are already in the world rankings and following the difficult Covid times, this will refresh the German boxing scene. We are excited to already announce the first dates and venues for the coming months, which will feature Germany’s finest boxers. This move will give us the strength to once again bring the big international names to Germany.”

“This is a massive move for German boxing,” said German boxing legend Arthur Abraham. “I faced the biggest names from the US and the UK in Germany during my career to become a global superstar and this will allow the future of German boxing to conquer the world.”

“We’re delighted to enter this ground breaking agreement with Probellum,” said Fahri Ecvet, COO of Global Football and Boxing at Wasserman. “This deal signals the start of a new era for German boxing. Fans can look forward to a series of incredible fight nights, while our Wasserman Boxing fighters will have the platform to become international stars.”

“We are ecstatic to announce this fantastic co-promotional agreement with Wasserman Boxing,” said Richard Schaefer, President of Probellum. “We have already established major partnerships with promoters around the world, and this is one of the biggest yet.

“Wasserman Boxing is one of the best entities in the entire sport, and it is a major statement of intent from Probellum to secure this deal. It will mean German boxing is taken to the next level, and it is an extremely exciting time for everybody involved.”