PROBELLUM: Revolution – Edwards vs. Mama this Saturday in Dubai 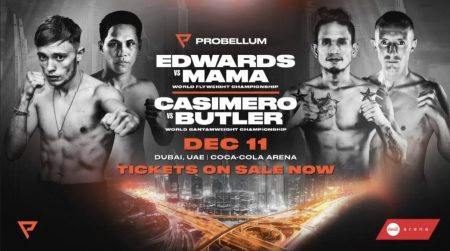 FreeSports is delighted to announce they will broadcast the newly-launched PROBELLUM boxing promotion as it hosts its first major event this Saturday December 11th in Dubai. The full event will be available from 4pm GMT on Premier Sports 2 and BoxNation while FreeSports will join the coverage at 5.30pm GMT for the main events available free to watch in every home in the UK.

Three-division champ Casimero has won 7 straight with 6 monstrous knockouts.  His most recent win was the biggest of his career, defeating two-time Olympic gold medalist Guillermo Rigondeaux.  The contender Paul Butler aka ‘Baby Faced Assassin’ hailing from Cheshire, England, is a former IBF World Bantamweight Champion and looks to utilize his savvy boxing style to re-assert himself at the top of the sport.

Richard Webb, COO of Premier Sports/FreeSports commented, “We are delighted to partner with Probellum to broadcast these inaugural boxing events this December and make it available free to watch in every UK home in the UK. Both events feature popular British boxers we’re confident will be a big hit for our viewers and we’re looking forward to the coverage.”

Richard Schaefer, Probellum President said, “To be able to broadcast our very first event free to air in the UK, one which will go down in history with a terrific card is incredibly important to us and we’re thankful to FreeSports for their partnership in making this happen.”

FreeSports is available as a free to air sports channel operating in the UK on Sky HD Channel 422, Virgin TV HD Channel 553, Freeview Channel 64, BT/TalkTalk Channel 64, Samsung TV Plus and online via the FreeSports Player. Premier Sports 2 is available on Sky channel 429, Virgin TV 552 while BoxNation is on Sky channel 427, BT/TalkTalk channel 415 and Virgin TV channel 546. Premier Sports and BoxNation are both available via online streaming on the Premier Player.

Conor Benn faces Chris Algieri this Saturday live on DAZN Paul Butler: I am not scared of anybody, Casimero is the same as me!