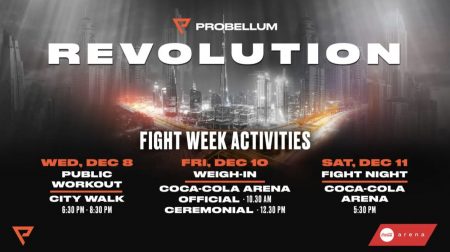 The UAE’s biggest-ever boxing occasion takes place in Dubai this coming Saturday (December 11) as the Coca-Cola Arena hosts Probellum: Revolution, with an action-packed week of events taking place in the lead-up to Fight Night, including a Public Workout – which is open to the media and members of the local community – at City Walk on Wednesday December 8.

Probellum, the fastest-growing brand in the world of boxing, announced its arrival into the sport in September, and in less than two months it has made a huge impact, signing over 20 top-level fighters to its stable, including the likes of Badou Jack, Ricky Burns, Muhammad Waseem, Paul Butler and Nonito Donaire.

World-famous ring announcer Michael Buffer, who has worked on some of the biggest fights in the history of the sport, is confirmed for the event, while Uzbekistani boxer Bakhodir Jalolov will be making his first appearance since winning a super-heavyweight Gold medal at the Tokyo Olympics in August.

In the lead-up to the event, every fighter on the card will be taking part in a Public Workout at City Walk on Wednesday December 8, where media are invited to attend in order to conduct interviews with the boxers and Buffer, along with other Probellum talent involved in the event, including broadcasters Jim White and Ali Drew, Sam Jones and former fighter Paul Smith.

Members of the public will be able to head down to the event and watch the boxers being put through their paces on the pads, while also enjoying a series of family-friendly activations hosted by KO8 Fitness, WOW HYDRATE and Greenhill. There will also be a meet & greet with the fighters, and an opportunity to purchase tickets for Saturday’s Fight Night. The event runs from 6.30pm until 8.30pm.