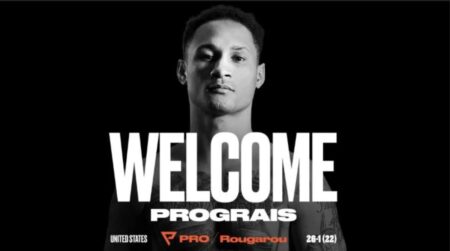 The American star is currently ranked as the #1 fighter at 140lbs with the Ring Magazine, and is also ranked #3 with the WBC, #4 with the WBA, #5 with the IBF and #7 with the WBO.

Known for his incredible power and elite boxing skills, 32-year-old Prograis holds stoppage wins over fighters such as Ivan Redkach, Kiryl Relikh, Julius Indongo and Juan Heraldez, and looks destined to become world champion again in the near future.

The signing of Prograis is the latest ground-breaking move from Probellum, helping to achieve their athlete-first approach, which ensures to put the fighter first. It also gives boxers the chance to fight all over the world, with Probellum looking to end the fragmentation in boxing by working with all promoters across the globe to promote landmark events.

Prograis is the latest big-name fighter to join forces with Probellum, after it was announced that they will continue forward as unbeaten welterweight sensation Eimantas Stanionis’ promoter.

“Since I started boxing I’ve always wanted to become a world champion and fight all over the world,” said Prograis. I decided to sign with Probellum because they are holding shows worldwide, and I can achieve my dream of fighting all over the globe.

“It is is something I’ve always wanted to do, and I’m looking forward to this next chapter in my boxing career alongside Probellum.”

“Signing Regis Prograis is a superb statement of intent and we are delighted to have him joining the team here at Probellum,” said Richard Schaefer, President of Probellum. “He is one of the best fighters on the planet and we’re confident he will become world champion again soon.

“This is just the start of what will be an extremely stacked roster of talent at Probellum, so boxing fans can get ready to see the best and biggest fights delivered to them.”

News on when Prograis will have his first fight under the Probellum promotional banner will be announced in due course.