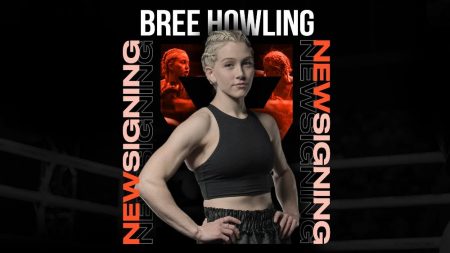 Probellum is delighted to confirm the promotional signing of Bree Howling – a future star of women’s boxing.

Howling, who hails from Calgary, Canada, is 3-0 since turning professional in 2019 having moved to the sport from Muay Thai, where she was a national champion.

Coached by Declan Walsh, a nutritionist to Regis Prograis and Errol Spence Junior among many other elite level fighters, Howling has a fearless attitude and had no hesitation accepting fights with Skye Nicolson and Ramla Ali earlier this year – only for those contests to fall through without explanation.

“Female boxing has never been as hot as it is right now,” said super bantamweight Howling, who has plans to fight in the UK this year.

“It’s an unsaturated market and it’s on the rise. I know I am going to be seen and I’m going to be able to make waves with the talent that I have.

“Especially in the U.K., the pool of females in the bantam and super bantamweight divisions is super plentiful. So, there are many fights to be made at my weight class, so I’m happy to be there.

“This is perfect timing.”

Howling last boxed in May 2021 and says the “biggest issue” has been ensuring her fights don’t fall through – like in the case of Nicolson and Ali.

“I was due to fight Skye on March 5 for her debut,” Howling said.

“The fight was going to be three or four weight classes above me and on short notice, but I took less than five minutes to say ‘yes’.

“The person at Matchroom came back to us said: ‘Skye’s team doesn’t want to fight’.

“They then offered me Ramla Ali, and I said: ‘Yes’.  I didn’t take any time to answer, five seconds if that, but Matchroom came back an hour or two later saying that Ramla’s team didn’t want to fight.

“The Skye fight was then being planned for Madison Square Garden, on the Katie Taylor-Amanda Serrano undercard, and we were waiting to sign the contracts, when there was some excuse made and that she wasn’t going to give me the fight anymore.

“Maybe one day I’ll just put that weight on, and we’ll go to it.”