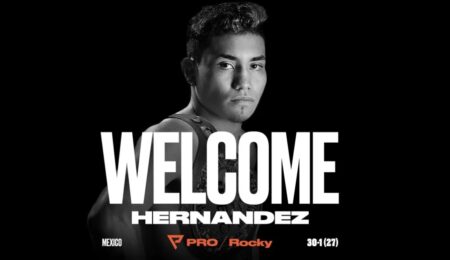 Hernandez (30-1, 27 knockouts) is arguably the biggest puncher in the 130lb division, with all but three of his wins coming inside the distance. His last 24 victories have all come by knockout, making him one of the most exciting fighters on the planet.

He is currently ranked #5 in the world by the WBC, and at just 23-years-old, looks certain to have an extremely bright future ahead of him.

Probellum advocates a fighter first approach, ensuring that the athlete is empowered and put ahead of everybody else, whilst also giving them the chance to fight all over the world, as Probellum is looking to end the fragmentation in boxing by working with all promoters across the globe to promote landmark events.

“I feel happy and blessed to be part of this movement, but more than that I’m grateful,” said Hernandez. “With my new manager Ferco Box, my advisory team and now adding Richard Schaefer and Probellum, I truly have the best team in boxing. Nothing will stop us.”

“It is a privilege to have somebody as exciting and talented as Eduardo ‘Rocky’ Hernandez join us here at Probellum,” said Richard Schaefer, President of Probellum. “At just 23-years-old, Eduardo’s entire career is ahead of him, and we are certain it will be an extremely successful one.

“Mexico and boxing go hand in hand, and signing a world-ranked knockout specialist like Eduardo is the first step in what is going to be some big moves for Probellum in that country.”

News on when Hernandez will have his first bout after signing with Probellum will be announced in the near future.

Tyson Fury vs. Deontay Wilder 3 video predicting who will win and why On this day: The immortal Benny Leonard retired