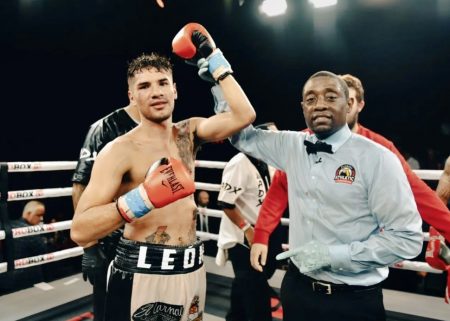 The first semi-final was a back and forth fight and very close to call. Paul Malignaggi, Antonio Tarver and Roy Jones Jr. called it from ringside. Prior to the scores, it was announced that if the fight was a draw, they would fight one more round!

Turns out, Kendo “Tremendous” Castaneda (19-5, 9 KOS) won 96-94 over Joseph Fernandez (15-5, 3 KOS) on all three of the judges cards. Malignaggi called it a Fight of the Year candidate, saying “I can’t believe neither fighter went down in round nine.” In round nine, Kendo was hurt with a straight left, then later in the round, connected with a right hook that hurt Fernandez real bad. Fernandez struggled to stay on his feet and barely made it to the end of the round.

“Before the fight I knew it was going to be a tough fight – he was looking at me with eyes of fire,” said Castaneda. “After the 6th round I went back to my corner and I was exhausted and they said ‘you’ve got to keep pushing.’ In the ninth round, I knew I hit him with a good shot and he wobbled but he made it to the end. It feels great to get the wind. It makes me believe that the hard with I am putting in, in my life, does not go unnoticed. Keep pushing and keep working harder. Any fight can turn in your favor. Now of course I will stay and watch the next fight so I can see who I will fight for that $50,000 Check!”

The second semi-final and main event of the evening was a little more one-sided with Antonio Moran (28-5-1, 19 KOs) controlling the pace. He was hitting Michael Dutchover (16-3, 10 KOs) with body shots and combinations. Dutchover attempted throughout the fight to get inside, but seemed frustrated as Moran kept his distance as needed, fighting as Malignaggi said “in a middle range.” The final scores were 99-91 and 100-90 two times.

Sometimes it would get very complicated for me. I couldn’t just throw combinations because he would get too close and it made me feel a little off. One of the things I said from the time I saw him that we were going to meet in the final. I know now that I have to work on my conditioning. I am going to have to work real hard to take that final. This tournament is a great opportunity. It is a second chance for me to not only win this tournament but there will be doors that will open afterwards. Hard work brings opportunity.”