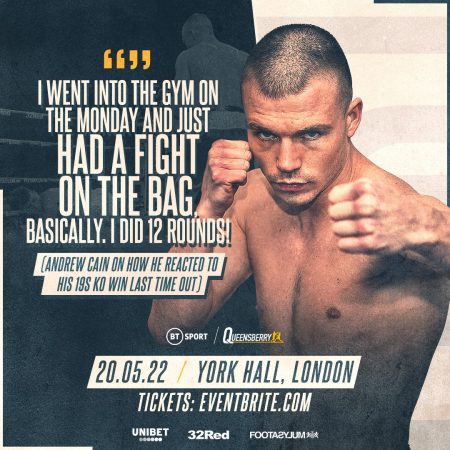 Blasting out an opponent in the first 10 seconds of a fight would normally be considered a great source of satisfaction for a fighter on the up. For Andrew Cain it resulted in a 12-round fight with the heavy bag.

The new WBC International Silver super bantamweight champion poleaxed the usually durable Pablo Ariel Gomez with pretty much his first shot of the fight in Telford last time out and subsequently carried the appearance of an agitated prizefighter who had too much left in the tank.

Gomez, it should be noted, was last stopped back in 2014 in two six-rounders early on in his career in his native Argentina, so being clubbed to the canvas was not a familiar experience for him.

This time it was all over in an official time of 19 seconds when you take into account the count and referee John Latham’s assessment of his ability to continue.

The Scouse firebrand Cain was in no mood to celebrate his early night.

“You know what, I went into the gym on the Monday and just had a fight on the bag, basically! I did 12 rounds, imagined it never happened, and just took it out on the bag.

“To be honest, I knew it was a nice shot, but I thought the ref was going to let me go. I was just going to put him down again anyway so the ref probably did a good job.

“It would have been nice to get a few more in so no-one had anything to say, but the refs know what they are doing,” added the 26-year-old, who does acknowledge that the outcome was typical of him, given that he has bludgeoned eight of his nine opponents to date into an early submission.

Cain knows that his profile is increasing as people catch on to his explosive performances and powderkeg attitude to the fight game. There will never be a dull moment while he is going about his business and the public are starting to take notice.

“I don’t pay too much attention to all that but I suppose they must be,” he conceded. “You can’t really be denied if you do what I am doing, so it is gonna happen sooner or later.

“It definitely feels like it has picked up a bit, so I need to keep getting these fights and keep winning them. You can’t deny me then.”

Next up is Luis Moreno, 10-2 (6 KOs), in a defense of his title at York Hall on Friday May 20. Cain admits that carrying out due diligence on the threat in front of him is not really his thing.

“It is just so you’ve got a picture of their face in your mind because you never know what they are going to do. They could fly at you, they could run, so you have got to be prepared for everything.”