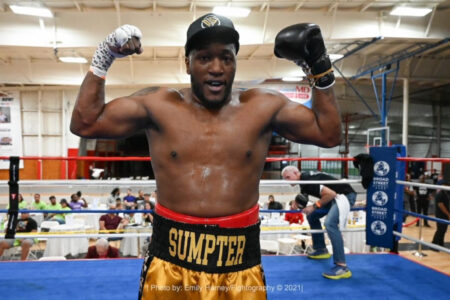 Undefeated Pittsfield (MA) Quintin Sumpter (5-0, 3 KOs heavyweight has been preparing a long time for his expected breakout fight on October 29th against Jeremiah “Dream Land” Milton (6-0, 5 KOs) ) in a 6-round bout on the Jake Paul-Anderson Silva Pay-per-view undercard at Gila River Arena in Glendale, Arizona.

Sumpter was originally slated to fight Milton this past August 6th on the Paul-Hasim Rahman, Jr. PPV card at the famed Madison Square Garden, but the entire card was canceled because Rahman couldn’t make the agreed upon weight.

Sumpter may still be fighting Milton, however, he’ll be traveling to Arizona instead of the Big Apple.

Born and raised in Brooklyn, Sumpter moved away in 2006 to attend college.

“It was very frustrating,” Sumpter admitted regarding the Aug. 6th cancellation. “I got ready to fight and sacrificed a lot, but I’m back on track. I’m disappointed to not be fighting at Madison Square Garden, but I’ve never been to Arizona. It’s still a big fight.”

The 6’ 0”, 220-pound Sumpter will be giving away 4-inches and 10-pounds to Milton, who was a defensive end on Northeastern State University’s football team. Sumpter, though, doesn’t feel that he’s at a size disadvantage against Milton.

“People know me in Massachusetts and New Hampshire. Winning this fight will open a lot more eyes for me in boxing.”

“Quintin has done everything right from the onset of his pro career,” Sumpter’s promoter Chris Traietti (Granite Chin Promotions) added. “He is one of those guys that ‘gets it.’ He turned professional at an older age, so he knew right away that we have to move at a rapid but not reckless pace. He took on undefeated Tim Hatfield, then the rugged Tracey Johnson, all within his first 5 fights. Now for his sixth fight, he is going on the road to fight another undefeated prospect, who I’m confident won’t be undefeated after October 29th. Winning this fight puts ‘Q’ on the ‘national prospect’ stage. The larger promoters will be taking a close look at him. I am never one to put the cart before the horse, so we will see what his options are after the 29th, and we will make the best decision for the next step in his career.”