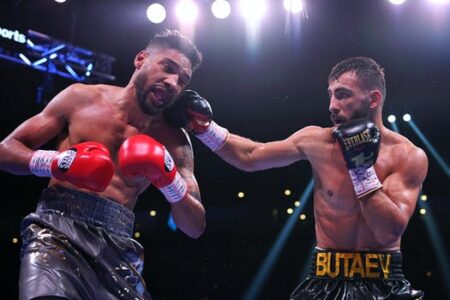 Radzhab Butaev was awarded the World Boxing Association (WBA) October Boxer of the Month after becoming the new welterweight champion this weekend, while Thammanoon Niyomtrong was won the Honorable Mention recognition thanks to his minimum weight belt defense.

The pioneer organization released its October the rankings with all the corresponding changes and with them the individual awards for the span.

Butaev left a pleasant impression this weekend at the Mandalay Bay in Las Vegas, defeating Jamal James by technical knockout in the ninth round and taking the WBA welterweight title from him. In addition to becoming the new champion, the Russian gave a good performance in the U.S. soil and won the first fight of the WBA Box off.

On the other hand, Niyomtrong defended his title last October 5 against his countryman Siridech Deebok in his native Thailand. The 105-pound champion got a third round TKO and a new defense that evidences him as one of the best minimum weight boxer in the world.

The rankings of the pioneering body with all the movements of the month can be reviewed in the corresponding section of the official website of the World Boxing Association.