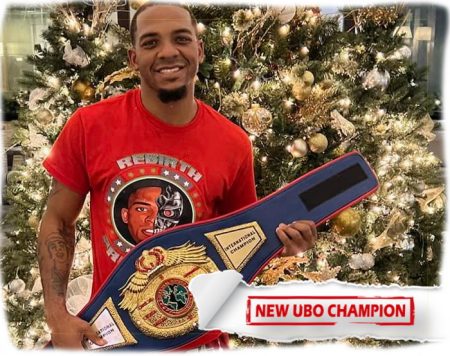 On Sunday evening, December 19, at the Marriott Century Center in Atlanta, Rance Ward impressively defeated local favourite Sixto Suazo to win the vacant title after an intense and competitive fight.

Ward made an early impact when he hurt Suazo inside the first minute of the first round, and went all out to capitalize. He finally knocked Suazo down with a perfectly timed overhand right just before the end of the round.

However, Suazo beat the count of referee George Chip, and a fired-up Ward was not able to follow up as the bell sounded.

At that point, it looked like Ward might be in for an early night, as he was in full control in a one-sided second round, landing good shots from both the orthodox and southpaw stance.

But Suazo would not fold easily, and slowly got his legs back. In round five he came out aggressively, looking determined to turn the tide. From that point on it was mostly the home-town man coming forward, and he had his share of success doing so.

The second half of the bout was especially thrilling, with both men giving as good as they got. Ward didn’t shy away from going toe-to-toe with Suazo, but he was also effective in picking him off, boxing excellently on the back-foot at times.

Both men went all out in the final round, and Suazo deserves credit for finishing strong in a fight he looked destined to lose emphatically after the first three minutes.

After eight rounds of high-paced action, judges Richard Sells, Carl Williams and Erik Gilbert all scored it 76-75 for Ward, the knock-down sealing the unanimous decision victory for him.

Capturing his first professional title, 27-year-old Ward improved his professional record to 6-3-1 (2), modest statistics which doesn’t do his abilities justice.

Suazo (32) falls to 9-2-1 (7) after winning five straight coming into the Ward-encounter. A pro for less than three years, he can certainly come again, and a rematch would be highly anticipated.

The fight headlined a show promoted by One Slick Boxer Promotions.