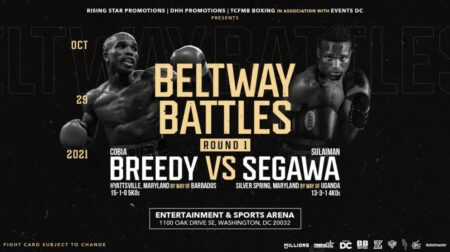 Rising Star Promotions in Association with Events DC, DHH Promotions, and TCMFB Boxing are teaming up with MILLIONS.co, a powerful end-to-end social e-commerce platform for professional athletes to sell custom branded merchandise and connect with millions of sports fans around the world through personalized videos and watch parties, will handle the Pay-Per-View broadcast of the inaugural edition of the Beltway Battles series, live from the Entertainment & Sports Arena, home of the WNBA Champion Washington Mystics and Capital City Go-Go of the NBA G-League on Friday, Oct. 29, beginning at 9:00 pm EST. Rising ringside star “Sweet Baby” Ray Flores will be on the call, and will be joined by undefeated prospect Albert Bell (16-0, 5KO).

Flores, who hails from Chicago, got his start as a ring announcer, announcing local MMA fights on public access television. That experience helped him to get local announcing gigs with long-running Chicago promotional company, Hitz Boxing, and eventually would lead to a four year stint with Golden Boy Promotions.

Flores’ passion for the sport only grew, and he was soon serving as an in-arena host for Premier Boxing Champions, traveling the world, and hosting some of the sport’s biggest events. In 2017, he graduated to calling fights ringside, beginning with PBC’s Tuesday Night Fights series on Fox.

“I love what the Beltway Battles team is doing,” Flores said of the opportunity. “There is passion behind the product – quality matchups, and quality production at a club show level. They are raising the bar on the East Coast, treating this like a major TV card, and giving guys a platform. They’ll be more prepared for the big stage because of what we’re doing with Beltway Battles. It’s great to be a part of it.”

MILLIONS.co has brought together commerce, social media and video streaming to build an all-inclusive platform for athletes and promoters to showcase the best versions of themselves.

“Having MILLIONS.co and Ray Flores on board really speaks to the level of quality we want to bring to DC fight fans, and viewers throughout the world,” Thomas LaManna, Rising Star Promotions’ CEO, said. “Albert Bell, who is a MILLIONS.co athlete, is a welcome addition to the commentary team, and can provide insight from the fighter’s angle alongside Ray’s excellent play-by-play commentary.”

Viewers can watch Beltway Battles: Round 1 beginning at 9:00 EST at MILLIONS.co for $12. The card is headlined by Cobia “Soldier” Breedy (15-1, 5KOs), who faces Sulaiman Segawa (13-3-1, 4KOs) in a 10-round featherweight bout with the WBC Continental Americas featherweight title. 2012 Chinese Olympian and No. 1 ranked IBF light heavyweight contender Fanlong Meng (16-0, 10KOs) will take on Israel Duffus (20-6, 17KOs) of Panama in a 10-round affair. DeMarcus “Chop Chop” Corley, Dusty Hernandez-Harrison, Jalil Hackett, Cornell Hines, Marq Johns, Sam Crossed, Donnell Poe, Paul Bamba and others are slated to make appearances on the premier event of the Beltway Battles series.