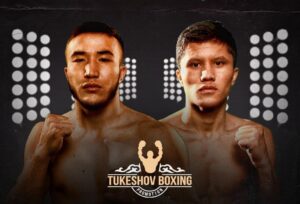 Undefeated Kazakh star Ray Seitzhanov will kick off the year with a bang later this month when he returns to action in Almaty.

Seitzhanov (5-0, 2 KOs) will take on fellow undefeated fighter Nurbol Berdimuratov (2-0) at the Tynyshpayev Academy of Transport and Communications on Tuesday 26 January.

It’s a quick return to action for Seitzhanov, after he picked up a dominant first round stoppage win over Evgenii Vazem in December.

It rounded off a successful 2020 for the 22-year-old, going alongside his wins over Berikbay Nurymbetov and Talgat Bertleuov earlier in the year.

The event later this month is being held by Tukeshov Boxing, and will also feature the likes of Dastan Saduuly, Yernur Akhylbek and Nurslan Sabirov.