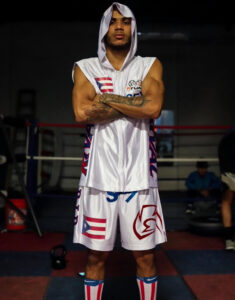 Mosley’s On The Charles in Dedham, Massachusetts 31/7/21

The 23-year-old Bermudez, fighting out of Albany (NY), faces Bergman “The Snake” Aguillar (15-8-1, 5 KOs), the former WBA FEDALATIN Super Featherweight Champion, in the 8-round main event for the vacant NBA Continental junior welterweight title in what will be the first pro boxing show ever in the neighbouring Boston town of Dedham.

“I’m excited to be headlining for the first time,” the former upstate New York amateur standout Bermudez said. “I’m going to put on a good fight for the fans and do my thing. My opponent is a southpaw and I’ve fought three southpaws. Straight right hands, go left not right, and stay away from his left is the plan. I want to get him out no later than five rounds. I’ll box, set him up, and hopefully get him out.”

Hector Bermudez, who Hector has trained several world champions including TJ Doheny and Javier Fortuna, is his nephew RayJay’s head trainer. He treats me like anybody else, no special treatment,” RayJay explained. He pushes me to the limit and doesn’t take it easy on me. That’s good for me.”