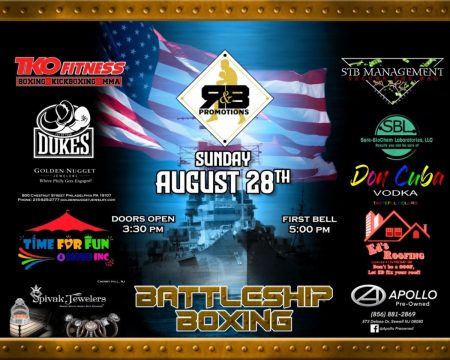 The lineup has been set for the Inaugural Battleship Pro Boxing that will take place on board The Battleship New Jersey on Sunday, August 28th in Camden, New Jersey.

The card that is promoted by R&B Promotions and will begin at 5 PM ET.

In the six-round main event, undefeated welterweight Tahmir Smalls of Philadelphia will takes on Joel Guevara.

Smalls of Philadelphia, has a record of 8-0 with five knockouts. The 23 year-old is a three year-professional and is coming off a first-round stoppage over Roque Agustin Junco on June 24th in Philadelphia.

Guevara of Charleston, West Virginia is 4-7-1 with three knockouts. The 34 year-old Guevara is a seven year professional and is coming off a loss to Victor Toney on July 31, 2021 in Ashland, Kentucky.

In the six-round co-feature, Danny Murray of Lanoka Harbor, New Jersey takes on Michael Gibbons of Atlanta, Georgia in a junior welterweight fight.

Eliezer Omeda (1-2) of Camden, New Jersey will squabble with Aaron Newmones (1-0) of Atlantic City, New Jersey in a welterweight bout.

Timothy Tyler (0-3) of Camden, New Jersey will take on Davon Hall (0-3) of Wilmington, Delaware in a super middleweight clash.

In a battle of debuting junior middleweights, Anthony Dil of Hatboro, Pennsylvania takes on Ramses Brown of Bellmawr, New Jersey.

Terrick Maven (0-1) of Vineland, New Jersey will square off with pro debuting Daniel Bean of Old Bridge, New Jersey in a heavyweight bout.

Tickets are $100 and $50 and can be purchased at The Following Link  https://randbpromo.ticketleap.com/pro/

THERE WILL BE AN OPEN WORKOUT THIS SUNDAY, AUGUST 21ST AT TKO FITNESS (1615 KINGS HIGHWAY( IN CHERRY HILL, NEW JERSEY AT 1:30 PM