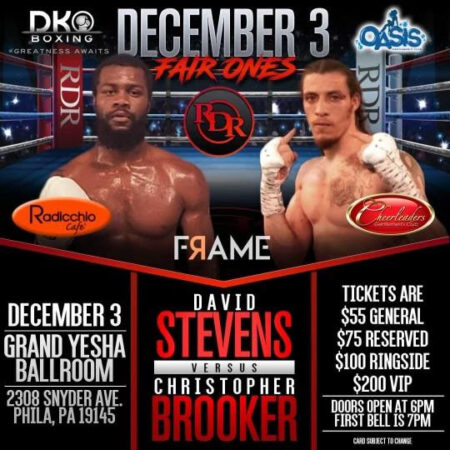 Stevens of Reading, PA is 11-0 with eight knockouts. The 22 year-old Stevens is coming off a second round stoppage over Loris Barberio on July 23rd in Dallas, Texas.

Brooker of Philadelphia is 16-12 with six knockouts. The 31 year-old Brooker is a seven year professional who has shown a willingness to fight anyone, anywhere, anytime. Brooker has wins over Leo Hall (8-0), John Magda (11-0), Antowyan Aikens (10-1-1), Gabriel Pham (6-0), former world title challenger Elvin Ayala (28-7-1) and Lanell Bellows (18-2-2). Brooker is coming off a loss to Demond Nicholson on August 6th in Hanover, Maryland.

In the co-featured bout, Brendan O’Callaghan (3-1-1, 1 KO) of Philadelphia will fight Boimah Karmo (3-0-1) of Sharon Hill, PA in a four-round super welterweight contest.

Edwin Cortes (3-0) of Millville, NJ will take om an opponent to be named in a super flyweight bout.

Jalique Holden (2-0, 1 KO) of Wilmington, DE will take on an opponent to be named in a junior lightweight fight.

Ghandi Romain of Union City, NJ will make his pro debut against an opponent to be named in a super welterweight fight.

Romelle Terrell of Chapel Hill, NC will make his pro debut against Jerome Allen (0-6) of Augusta, GA in a heavyweight bout.

Jayon Tinnin of Philadelphia takes on Juan Gutierrez (0-2) of Estnell, Nicaragua in a super flyweight bout.