Record-setting boxer Paul Iannuzzi hangs up gloves after one bout 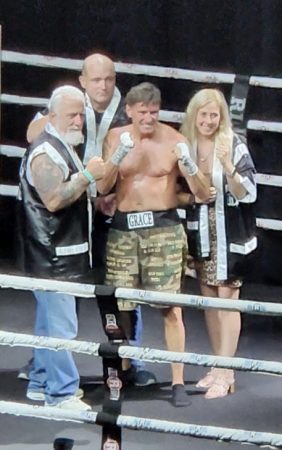 History was made last Friday night in Worcester (MA) as 52-year-old Paul “Rude Dog” Iannuzzi became the oldest boxer in the world to make his professional debut.

Iannuzzi knocked out Lucinei Santos late in the opening round of their scheduled 4-rounder. Santos came out of his corner throwing wild bombs but Iannuzzi, fighting as a welterweight, buzzed Santos with a left hook that disoriented him, followed by a right that closed the show at the 2:55 mark, much to the delight of the Iannuzzi’s many supporters in attendance at the famed Worcester Palladium. 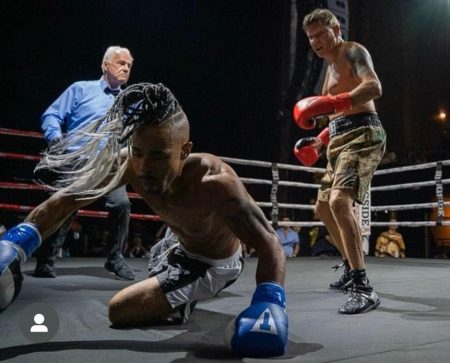 “It was pure relief,” Iannucci talked about what it was like right after the fight. “There was pressure if I had lost. Who will let me lead them or take lessons from me was in the back of my mind the night of the fight. I was aware of the stress. When I won, I was relieved.

“I’ve been boxing for years; I knew I could land my right. My old coach, Joe Leddy, is so strict about fundamentals and I used ‘em during the fight. He (Santos) was there to win. He wasn’t there just for a payday. He came out trying to take my head off and just missed me with a left hook. I do have the fundamental skills and I knew I’d catch him. I had heard a couple of people who thought I would get killed. They compared our body types; he looked like Tyson and I’m more like Olive Oil. Word did get back to me and after the fight, I went over to the ropes and yelled to them, ‘I told you!’ It was nice to prove myself to those naysayers.”

Born in Smithfield, Rhode Island, Paul and his wife, Jill, own Rude Dog Boxing gym, along with  trainer Tom Hall. Iannuzzi has been boxing since he was 18, highlighted by gold-medal performances at several Masters Division World Championships in amateur boxing.

The genesis of Iannuzzi’s quest to break the record as the oldest pro-debuting boxer was a conversation Paul had 10 years ago with his then 6-year-old daughter Grace, as they watched the presentation of ESPN’s Arthur Ashe Courage Award to recipient Dewey Bozella, a boxer who was wrongfully convicted of murder and imprisoned for 26 years. Bozella gained celebrity status after his release and set the world record for the oldest pro-debuting boxer (52 years, 4 months).

Paul and Grace watched the ESPN ceremony together and Grace turned to her father and said, “You can do that dad. When you’re old enough you can break that guy’s record.” Grace reminded her father every year on his birthday this year he did it. Iannuzzi holds the new record of 52 years, 10 months, and 20 days old.

“Dewey actually contacted me and wished me luck,” Paul noted. “He told me to keep my chin down, hands up. It was wonderful to hear from him.”

Iannuzzi was walked to the ring, under a crescendo of support from his many fans, by his friend and multiple world boxing champion Vinny Paz, who advised Paul to use the first 30-seconds to feel out his opponent to figure things out. Iannuzzi did that and much more. Just ask Santos.

“He (Paul) was slightly amazing,” Paz remarked after the fight. “I was as nervous as hell. I had my fingers crossed the whole night. It was like magic for me to see what happened. It couldn’t have ended any better than that. It was a slightly incredible night. It doesn’t happen often. Nobody try this is you are around 52 years old. Don’t do it! You got to love him (Paul) and that’s the bottom line.”

Right from the initial announcement of Paul’s journey, he said it would be a one-and-done regardless of the outcome. He will now fully focus on his “Life and Balance” program he created for the elderly, movement disorder, and Parkinson’s.

“Now, I will be a leader in terms of healing and helping people,” Iannuizzi explained. “I have the best program – it’s undeniable – with body mechanics, physiology, and the science behind it. I wish (sufferers like) I could connect with Alan Alda, Neil Diamond, Linda Ronstadt, or Ozzy (Osbourne). Maybe I can help them? They have the voices to get the word out to the public.

Shohjahon Ergashev & Ali Izmailov return in Detroit on August 10 The War: Hagler-Hearns and Three Rounds for the Ages – out now!