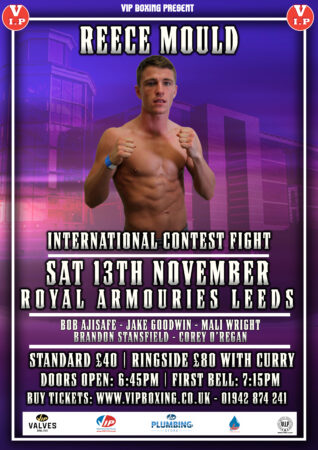 It’s the first time that VIP Boxing have promoted in the city since March 2013 when Leeds legend Josh Warrington defended his English Featherweight title against Jamie Speight.

Ironically Josh’s training partner and close friend, Reece Mould (14-1, 6 KOs) tops the bill on the return to West Yorkshire in an eight round contest against an international opponent to be named.

The undercard is talent-stacked featuring a string of future VIP Boxing champions.

Doncaster’s Mould, 27, was beaten in a thrilling British Featherweight title fight by Leigh Wood in February and is back on the title trail. Wood has since upset Can Xu to become a WBA World champion, but instead of setting his sights on a rematch the VIP boxer has moved to Super-Featherweight.

Former British and Commonwealth Light-Heavyweight title holder Bob Ajisafe returns after a lengthy lay-off and aims to show the 175lb division he is still a major force.

Southpaw Ajisafe (19-4, 9 KOs) was outpointed by Hosea Burton in his last fight back in December 2019 and firmly believes he has one more title run in him. The Leeds star will box a six rounder, as will Heckmondwike Super-Lightweight Cory O’Regan (4-0).

VIP Boxing chief Steve Wood: “I have been promoting shows for more than 25 years and people will be surprised that VIP haven’t been to Leeds for such a long time.

“So many top boxers from the area have been managed by myself and promoted by VIP, and of course one of our greatest success story has been Josh Warrington.

“Reece Mould has trained alongside Josh for more than three years and improved so much. He may have lost against Leigh Wood, but performed so well against a man who is now a World champion.

“Bob Ajisafe will fight any Light-Heavyweight and will also look at the Cruiserweight division if there are good opportunities.

“It is time for us to make sure that VIP keep coming back to Leeds, and don’t leave it more than eight years again before we return.

“We have a strong undercard filled with boxers who will be headlining our Yorkshire bills for years to come.”

Tickets for this great night of action are £40 standard and £80 ringside including a curry.