Reeves vs. Whyte added to Lee Baxter card on December 18 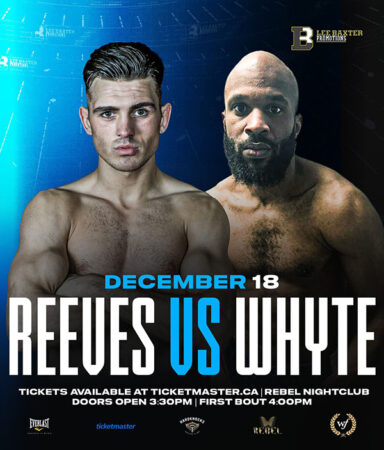 Ireland’s Lee Reeves has been announced as the co-main event at REBEL Entertainment Complex on December 18th. Another fantastic addition to the already stacked card brought to you by Lee Baxter Promotions. Headlining the event will be Joshuah Lupia (8-0 7KOs) as he takes on Lanardo Tyner (35-16-2 22KOs) in an all-action Welterweight bout.

Reeves was tabbed by none other than Tyson Fury as the next Irish boxing superstar and he has all of the qualities to live up to the statement. Reeves, an amateur standout in Ireland, won 2 Irish National Titles; 7 Munster Championships; and 7 Limerick Championships during his time as an amateur. Since turning professional, the majority of Reeves’ fights have been held in Canada. Reeves has been continuing to impress with his slick style that oozes confidence and he looks to showcase this on December 18th.

Fighting out of Mississauga, Larone Whyte will be in the opposite corner to Reeves. Whyte is the more experienced professional and he will use this to his advantage against the younger Reeves. Larone is no stranger to a tough challenge. A warrior that never backs down from a fight and always takes on the avoided prospects, as he will do again with Lee Reeves. Does he have what it takes to pull off the upset and derail Lee from getting into the international ranked fights?

Canadian Super Bantamweight Champion Amanda Galle (6-0-1) is back in action against Luz Elena Martinez (6-4 3KOs) in an 8-round contest; Martinez is a former WBC International Challenger. Moe Zawadi (4-1 4KOs), who was a 4x Canadian National Amateur Champion, will look to close out the year in spectacular style against local rival Marco Parente (1-4-3). Current Canadian Bantamweight Champion, Ross Mylet (7-1-1), will be getting the action underway on the night as he faces Eduardo Cruz Munoz (21-18-1 14KOs) in a bout scheduled for 6 rounds.

With tickets selling fast and close to being a sell-out, Lee Baxter Promotions has released a new batch of platinum and gold tickets on the stage. This show will be sold out.