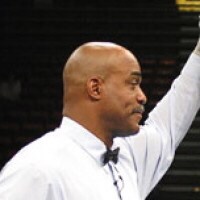 The following is taken from the New Jersey Boxing Hall of Fame:

“I started my boxing career at the age of fifteen, training at the Trenton P .A.L. boxing gym. There were a lot of great fighters that I trained with as well as great trainers such as Sammy Goss, Wally Livingston, George Johnson, David Sanderson, Duke Daniels, Percy Richardson, Robert Williams, Bucky Leggett and Wayne Hedgepath.

“My first fight was against twenty-three year old Tommy Bender, whom I defeated with a third round TKO. I accumulated a record of 96-18 in the amateurs. I competed in the New Jersey Golden Gloves tournament seven times, but that Championship eluded me. I went on to win the Mercer County Boxing tournament in three different weight classes, 156 Novice, 160 Open and 175 Open. I fought in the National and Olympic trials of the East. After graduating from high school, I went into the Army. When I returned from the Army, I turned professional, fighting such contenders as Mitch “Blood” Green, Chris McDonald, Jesse Burnett, Frankie Crasson and many others. Once again, I trained with some of the best such as Larry Holmes, Michael Spinks, Eugene “Cyclone” Hart, and Randall “Tex” Cobb. 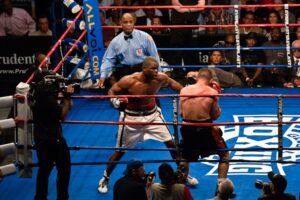 “When I retired, I became a judge and referee for the AAU Amateur Athletics Union where I attended numerous boxing shows, Golden Gloves Tournaments, Nationals and Eastern Olympic trials as well as the New Jersey Department of Corrections Boxing Program. After that I went into apprenticeship for the professional ranks of refereeing after being given the opportunity by the Honorable Commissioner Larry Hazzard, Sr. I had the privilege of working with such greats as Arthur Mercante, Joe Cortez, Tony Perez, Rudy Battle, Tony Orlando and others. I have refereed boxing greats David Tua, Chris Byrd, David Reid, George Scott, Juan Diaz, Elio Diaz, Imamu Mayfield and countless others. My career in boxing will go on indefinitely as long as God gives me the strength to endure. Pierre Benoist, one of my first teachers always told me, “Greatness is earned, never given.”

Lindsay Page is a well-known boxing referee in New Jersey, particularly in bouts taking place in the casinos in Atlantic City.

Our thoughts go out to his family.