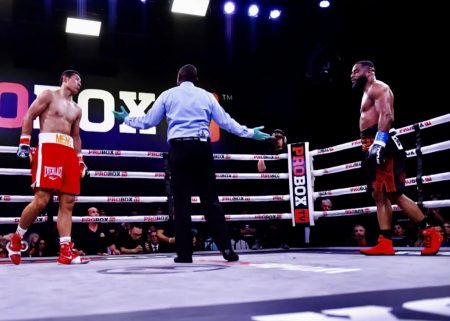 Top light heavyweight Meng Fanlong (17-0-1, 10 KOs) suffered his first loss in controversial fashion last weekend against two-time world champion, Jean Pascal (36-6-1) last weekend in Plant City, Florida. Following a very close and entertaining fight, the former champion got his hand raised by official scores of 114-113, 115-112, and 116-111. The key to the verdict came in round nine.

With just six seconds remaining in round Fanlong seemingly had won, Fanlong slipped to the canvas just after Pascal missed with a right and glanced a jab off Fanlong’s back as the slip began. Unfortunately, the referee called it a knockdown, turning a 10-9 round for Fanlong into a 10-8 round for Pascal. That three-point swing changed a draw into a Pascal decision. The slip was one of at least three during the fight as the signage on the ring canvas in the new ProBox facility seemed to be still wet.

Fanlong was fighting extremely well and was well ahead on the cards up to that point. All three judges had him winning the first three rounds. In the second, Pascal was hurt and dazed but recovered just before the bell. During the middle of the fight, Fanlong boxed effectively at range and neutralized most of Pascal’s flurries. Pascal’s experience, however, was successful at stealing some of those rounds. Despite being tired and hurt early, Pascal finished the fight strongly.

“Fanlong clearly won the fight,” said Shaun George, the former light heavyweight and cruiserweight who trains Fanlong and disputed the scoring as well as the slip ruling. “The referee made a horrible call in the ninth round when he slipped because the floor was wet. The fight wasn’t close. For anyone who hasn’t seen the fight, watch it and judge for yourself.”

Fanlong agreed and hopes for a rematch, even if it takes place in Montreal. “I feel like I did enough to win the fight,” he said. “I would love a rematch. I would be willing to go to Canada to fight Jean on his home turf.”