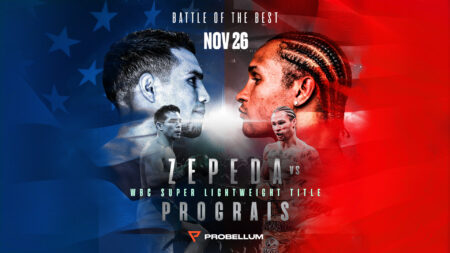 A recharged Regis Prograis insists he will not repeat the big mistake he made the last time he was world champion – taking it for granted.

The vacant WBC world super lightweight belt is up for grabs when Prograis collides with Jose Zepeda in a mouth-watering fight on Saturday, November 26 in Carson, California.

Prograis won the WBA strap in 2019 after stopping Kiryl Relikh and admits his ascent to the top of the division was “easy” and the significance was lost on him.

But the 33-year-old’s defeat to Josh Taylor in their huge unification bout, later that year, and his long wait to regain another shot, has made him change his ways.

And should he get his hands on the world title again at the Dignity Health Sports Park, next month, then the man known as ‘Rougarou’ has promised to savour every second of it.

“I feel like I’m totally different now because when I was the world champion – I’m going to be honest with you – I didn’t cherish it,” Prograis told Probellum.com.

“At the time I was preparing to fight for the belt I went to L.A. and for my first two weeks there we had parties at the house and all kinds of stuff, and this is me fighting for my world championship!

“But it was just it was easy to me, and I didn’t cherish it and then it was taken away from me just like that, real fast.

“So now, I feel like I’m a different fighter, my mindset is way different. The first time, it was easy. I just did it. It was easy. I was world champion, number one in the world and it was nothing to me. I didn’t even care about it. And this time it has been hard, to scratch my way back to the top to even get to the belt. So now I will cherish that even more. And now I don’t do all those things I used to.”