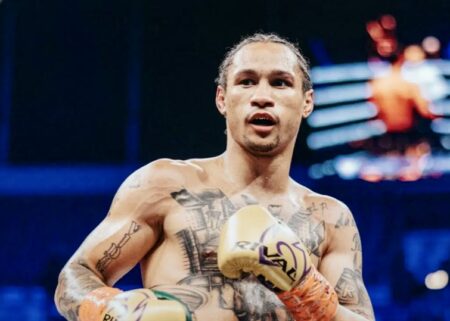 Regis Prograis has questioned why Jose Ramirez is now keen to fight him, comparing their paths to Errol Spence Jr and Keith Thurman.

Prograis looks to become a two-time world champion when he fights for the vacant WBC super lightweight title against Jose Zepeda in California on November 26.

Ramirez was initially ordered by the WBC to face Zepeda for the belt vacated by Josh Taylor, but the former world champion withdrew himself due to a conflict with his wedding and the governing body subsequently ordering Zepeda to face Prograis.

In a recent interview with Pro Boxing Fans, Ramirez expressed his desire to face the top 140lb contenders, including Prograis.

“Honestly, I would love to face Regis, because I’ve never faced him,” the 30-year-old said.

“I would love to make the rematch with Zepeda, because he’s such a good fighter.

However, Prograis has questioned why his rival is now keen to face him rather than when he was world champion.

“It’s kind of like the situation with Errol Spence and Keith Thurman.

“When Keith Thurman was champion, he never wanted to give Errol Spence a shot.

“So, for me with Ramirez, when he was the regular champion, they made me the interim champion.

“So, me and him were supposed to fight and we never fought.

“So, it’s like now all of a sudden you want to fight me so bad, but what happened four or five years ago?

“Me and him were supposed to fight a long time ago.

“Just the roles reversed, that’s all and it’s just kind of funny how things start to play out now.”