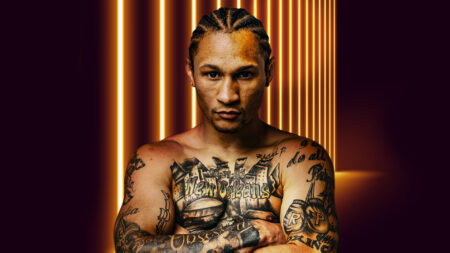 The former WBA champ has waited three years for another shot at glory after losing his belt to Josh Taylor in a tooth and nail 2019 classic.

Regis Prograis challenges Jose Zepeda for the vacant WBC super lightweight crown in California this weekend and has previously spoken of the torturous gap between title chances.

And the 33-year-old says the emotion of a victory over Zepeda on Saturday night could be too much.

The WBC have stated that the winner of Zepeda vs Prograis, must defend the belt against, first, Jose Ramirez, and then the winner of Teofimo Lopez vs Sandor Martin.

Prograis says after three years of being pushed to the sidelines, a win this weekend would thrust him back into the mainstream.

“For three years, nobody said my name at all,” he said.

“Nobody said my name. Everybody was ducking me because I am dangerous, and the value wasn’t there. But after I become a two-time world champion, then the value will be there and everybody will come out of the blue and start saying my name, it’ll be crazy.

“In front of my mind is only Jose Zepeda and that’s all I’m really focussed on right now. But you know, in a back of your mind, you always wonder what could happen and what comes after.”

And Prograis says it is not a foregone conclusion that Lopez would be waiting in line for a shot at him.

“It is definitely a dangerous step up for him, moving from lightweight,” Prograis said.

“He’s fighting Sandor Martin now, but when he was due to fight Jose Pedraza, I thought that was an easy fight for him. Sure, he’s fought some big names and been in some big fights, but I think he’s pretty much done. Teo was supposed to walk through him.

“But Martin is coming off a big win over Mikey Garcia and so, mentally, he will have more in him. If Teo can beat him in dramatic fashion, maybe he could do something at 140lbs but let’s see what happens.”