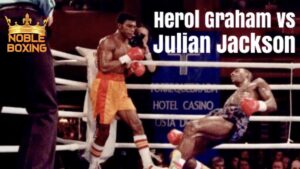 We all like boxing for different reasons. For some, it’s the “sweet science”, for others it’s the brutality of rendering the opposing combatant unconscious.

If it’s the brutal component of the sport that satisfies your thirst then I’m sure the left uppercut that Alexander Povetkin detonated on Dillon’s Whyte’s jaw did just that.

It was a typical boxing tale of a highlight-reel KO reversing the direction of a fight, a KO that was the equaliser. Povetkin was starring defeat in the eyes, he had twice been on the floor and was moments away from defeat. Then Povetkin landed.

Don’t get me wrong, I love watching a boxer fluidly out boxing an opponent. The sight of a fighter hitting and not being hit in return, tactically out-maneuvering his foe is a sight to be seen, but, to me, a fighter at the brink of losing and turning it around in the blink of an eye is the perfect fight for me.

Rewind time back to 1990 with Brit Herol Graham facing off against KO artist Julian Jackson in Andalusia (Spain) and this battle had a similar tale to tell.

I will not ruin the specifics. If you have twenty five minutes to spare, this testament of boxing brutality will not disappoint.

To watch the fight securely on our website , just click > here < or the image at the top.

Herol Graham was probably the best defensive boxer Britain has ever produced and one of the best boxers ever not to win a world title.