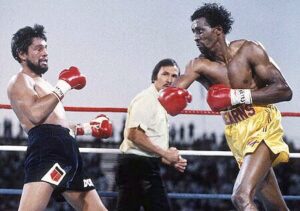 As I thought about the career of Alan Minter who tragically died just days ago at age sixty nine, my mind spiraled as I daydreamed about the middleweights he had faced throughout his career. The one match I recall clearly was against Marvin Hagler, where Minters face became a mask of blood as he lost via cuts marking the start of Hagler’s reign as middleweight champion of the world.

In June of 1984, Hearns went in against Duran at super welterweight (light middleweight) and what a fight it was. Well, it was a one-sided blowout to be more exact that was inflicted on Duran courtesy of Hearn’s quick fists and devastating power.

Duran was under prepared after partying hard, Hearns was on point, both physically and mentally. The result was a two round KO that was the only time in his long career that Duran had been knocked out as opposed to the referee stopping the fight or a corner retirement due to injury.

Watching the fight the day after it took place back in 1984, I recall my mouth was wide open as I watched the heavily bearded Duran fall face-first to the canvas, down and very much out. A boxing memory that has stuck in my mind over the years.

This classic fight had been missing from our classic fight list loaded on-site (our collection is growing every day). You can click > here < to see our growing collection.

If you have never seen it, I recommend that you do.

As time goes on, we will add all of the fights surrounding the “fab four.” Some of the fights are pure classic boxing, with others punching mastery. A couple of the fights, just seniors going for revenge in rematches that should of happened way prior.

For the moment, enjoy June 15th and the brutality it brought to the ring.