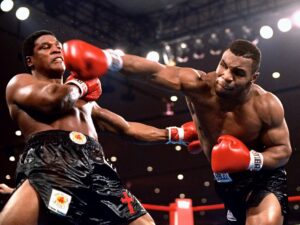 With November 28th approaching, our minds cast back to the glory days of Mike Tyson and Roy Jones Jr. Today, lets go back to November 22nd 1986. Maybe some of you were not around to remember the day but as a teenager I remember it clearly.

He was a wrecking-ball, knocking out all that stood in front of him apart from two fighters, James “Quick” Tillis and Mitch “Blood” Green. But was it enough to become world champion and at that point, the youngest of all time?

At the expense of Trevor Berbick (R.I.P), the defending WBC world champion, the question was answered.

Round two, and having been on the canvas once prior in the round, Tyson hit Berbick so hard he was dropped three times from the same punch, a punch that started a new era of boxing.

The fight was waved off with Berbick’s legs like jelly, he was at age twenty and now the youngest boxer in history to win the heavyweight championship.

The title reign started, Tyson then unified all the titles and the rest is history as they say.

Thirty four years later and headlining a PPV event with his exhibition with Jones Jr, can he reclaim anything from his glory days, his peak that was 1985-1988?

Watching the many video’s of his training APPEAR to indicate yes, and will it be enough to finish Jones Jr if this will be a battle that has any serious intent. Over eight rounds, no head gear and with judges scoring the bout, it again APPEARS that all is being taken seriously. Can Jones Jr put up any form of resistance to a Tyson that is at least showing commitment to his training that is obvious in the physical transformation, evident with all the footage on display. Personally, I doubt it. 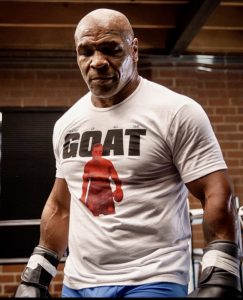 Jones Jr has lacked any form of punch resistance required at the top level ever since he moved down in weight from his only fight at heavyweight in 2003 (against John Ruiz). He has been knocked out by top level, mid level and, well, at the tail end of his career he has been a disaster waiting to happen.

All of this to many is a lot of fun and which, as an exhibition, it should be. Tyson’s purse is going to charity which is great. Coming out of COVID-19 (for some) this has helped put some life back into heavyweight boxing as boxing as a sport like most sports has suffered in this sad period of time.

With my crystal ball in hand, I see two rounds of feeling out by the two fighters then Tyson connecting as soon as he pleases, followed by a quick intervention by the referee. The two fighters will have enjoyed being in the spot light once again (even if at Jones Jr’s expense) but at this point it makes me think that if this truly is the outcome of the fight, what will be next for Tyson?

Being fair, it is difficult to gauge as we can’t really tell at this stage of mad-life, what the two really do have left even if these two mature combatant’s are training hard? And will it be a ‘softly softly’ exhibition (like Tyson’s exhibition against Corey Sanders in 2006 (click > here < to view) where Tyson helped Sanders up after knocking him down or a war that is promised by both?

Questions that only November 28th can answer.

But full circle and back to Tyson being the youngest heavyweight champion of all time. Can he be the oldest??!! If Tyson wins against Jones Jr and does it in quick fashion, there will be many hailing him as back to his best and shouting for him to return to professional boxing…I can hear it now! Many (or most) won’t (or shouldn’t).

At fifty four it would be the record and would beat George Foreman’s record of forty six but sadly it won’t happen nor would I think it would be allowed.

Being the youngest ever and holding this record since 1986 is an achievement and I cannot see it being broken in a long time. He is arguably the best ever (you can go to my heavyweight top 10 by clicking > here <) and the manor in which he beat Berbick was emphatic. It wasn’t a close decision, it was a brutal display of punching power that felled many fighters in the 80’s and 90’s but it will not sadly happen in this decade, certainly as a professional.

November 22nd 1986, a date that will always stick in the mind of many boxing fans.