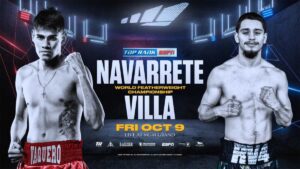 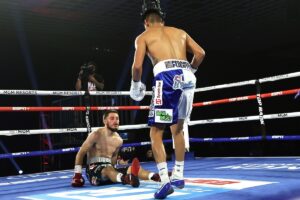 “I knew that Villa was a fighter that moved a lot and I knew that he was going to move even more once he felt my power,” Navarette said. 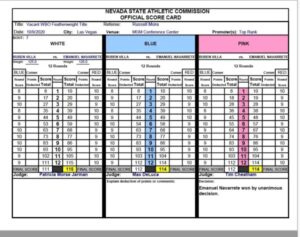 “I didn’t get the knockout, but I got the victory. I’m very happy with this championship. It’s a reflection of all the sacrifices and all the hard work I put in. I conquered my second weight class because of all that hard work.

“I have my sights set on all the world champions at 126. I would love to face {Josh} Warrington. I think that our styles will make for a great fight.” 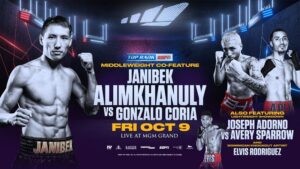 Fight Notes: 2016 Olympian southpaw Alimkhanuly, dropped Coria in round one and finished him off with a straight left in round two. Time was :59 with the bout made at middleweight. 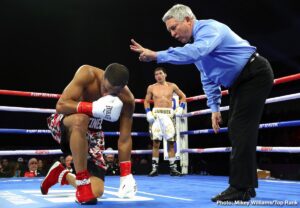 “I want to fight a world champion soon, like Demetrius Andrade and Jermall Charlo” Alimkhanuly said. “Canelo, of course. Top Rank promotes Ryota Murata 160. I want to fight him as well. Whoever the top guys are 160, I want them next.”

Fight Notes: A right hook caused the damage. The time of the stoppage was 0:53 with the bout made at welterweight. Rodriguez remains unbeaten.

“I feel very happy with this performance,”Rodriguez said. “This was my first eight-round fight, and things went way better than expected. I knew that I was facing a tough opponent who had only been stopped once, but I also knew that I had put all the hard work in the gym. My goal is to keep bringing up the flag of the Dominican Republic. That’s what I sacrifice for. I do it for my people. This was a big win, and there will be more to come.”

Fight Notes: Duversonne was credited with a knockdown in round five. Scores were 78-73, 78-73, 79-73 with the bout made at middleweight. Both fighters were unbeaten going into the bout.

Fight Notes: Jackson was down twice. The fight lasted seventy five seconds with the bout made at junior middleweight. Elliott was making his pro debut.

Venue: Bubble at the MGM Hotel Casino in Las Vegas.