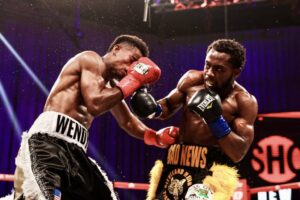 Fight Notes: Time of the stoppage was 2:42 with the bout made at junior middleweight. Both fighters were unbeaten going in.

Conwell: “I think this was a good fight for my first fight back, getting the ring rust off, but at the end of the day we got the job done. The game plan going in was to break him down round by round, go to the body until we got him to where we wanted him. I give my performance a C+, there were a lot of things I could have done better.

“I’m going to get back in the gym and continue to work hard to become the champion I know I can be. I’ll fight anybody next, but I really want an ex-world champion or ex-title challenger so I can get the championship rounds under my belt. Then it’s on to a world title.”

Fight Notes: Flaz was down three times. Time of the stoppage was 2:43 with the bout made at welterweight. Bocachica remains unbeaten.

Bocachica: “I came in and they said he wanted to brawl, and as soon as he did, the fight was over. The game plan was to showcase my boxing. I didn’t get to do that but I’m happy either way.

“I’m not shy calling out guys, but I’m trying to be respectful to the best in my division. I’m here, so bring them on. One-hundred forty-seven [pounds] is mine. It was easier than I thought, I’m not going to lie. But I didn’t think it was going to be hard.”

Fight Notes: Williams was down three times. Time of the stoppage was 1:34 with the bout made at welterweight. Lee remains unbeaten.

Lee: “I’m blessed with the natural power and that’s what the fans saw from me tonight – I’m here to entertain the fans and seek and destroy. The game plan was to go in there and do what I do best, which is to destruct anything that is in my way.

“When I fought last fall on Showtime for the first time in Texas I felt like we rushed it too much. And back in March on Showtime I felt like we waited too long. So I think this fight was perfect. We hit it right on the money, not too fast and not too slow.”

Fight Notes: Benichou was down twice. Navarro was making his pro debut with the bout made at featherweight.