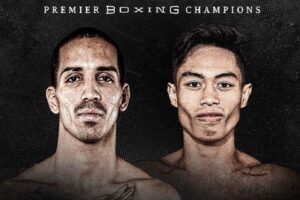 Fight Notes:  A clash of heads in the 1st round left van Heerden with a terrible cut on his forehead and the bout had to be stopped. Time of the stoppage was 2:39 of the 1st round and was ruled a no decision. Bout made at welterweight.

Fight Notes: The bout was abruptly waved it off at 1:17 of round 3 by referee Dan Schiavone. The Linger camp protested with the fighter claiming “I’m not even hurt!” Bout made at super welterweight.