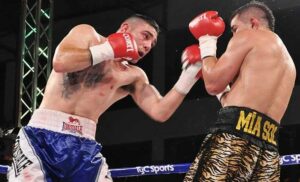 Ghukasyan landed a hard headbutt to the face during a move that the judge considered inappropriate and was disqualified awarding the win to the Argentinian fighter.

The collision caused a big cut between the eye and the septum of Villalba, who fell to the canvas in pain and had trouble getting back on his feet due to the strong impact.

The fight was being entertaining and both fighters were exchanging good punches until this action that ended the fight.