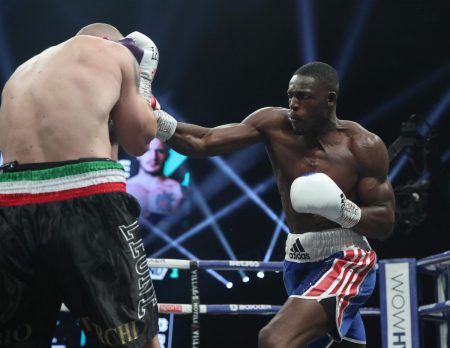 A superb second-round bodyshot sent Fabio Turchi to the canvas in tonight’s BOXXER main event, ensuring that the next stop for ‘The Midnight Train’ Richard Riakporhe (15-0, 11 KOs) will be world title contention .

Aired live and exclusively on Sky Sports, the main event saw London man Riakporhe drop Italy’s Turchi after just five minutes of fighting, his opponent’s corner throwing in the towel in recognition that their man was finished.

It was the first time Turchi had ever been stopped, an achievement underlining Riakporhe’s quality. Now ranked #2 with the IBF as a result of this victory, Riakporhe could be the next challenger for world champion Mairis Briedis.

Almost one year on from her stunning gold medal victory at the Tokyo Olympics, Lauren Price started her professional career in emphatic style, comfortably winning all six rounds of her debut bout and displaying impressive hand speed and stinging straight punches throughout.

Price grew and improved through the fight, getting comfortable in the scrappy, physical world of the professional side of the sport. She now looks to keep racking up professional fights and stepping up in quality of opposition all the way to World Championship level.

This fight had fans on the edge of their seats from the second it was announced, and despite a tentative first round, and a general feeling out period in the early stages, the fight came alive and delivered on the hype from then.

Zak Chelli (12-1-1, 6 KOs) walked away a comfortable winner on the judges’ scorecards, having consistently landed the more damaging and effective shots in the middle and late rounds, allowing him to build his lead on the scorecards. Chelli had serious success with the overhand right hand throughout the fight, and profited from the majority of the pair’s exchanges.

Viddal Riley (6-0, 3 KOs) showed why he is one of the most popular young fighters in boxing with a stunning one-punch left hook knockout against a tough opponent in Jone Volau. Viddal made a huge statement and now plans to fight twice more before the end of the year on his path up the rankings.

The early rounds were cagey, but a few perfectly timed 1-2 combinations in the 6th round gave Kongo control and he never gave it up, pushing on from there to develop his comfortable lead. Kongo came within a few clean shots of stopping the fight in the 10th and final round but Formella showed tremendous heart to stay on his feet and then fire back, defiantly reaching the final bell.

Ben Shalom called this fight “make or break” for Chris Kongo in the build-up, and Kongo lived up to the pressure and took victory, now positioning himself well in the division for big fights soon.

Jimmy Lee (2-0, 1 KO) made a huge statement of intent with his inch-perfect performance on the way to a 3rd-round-stoppage tonight. Commanding the ring from the start and consistently flicking out jabs from his low-lead hand and following up with powerful straight left hands.

Lee was barely touched by a game opponent in Ricky Starkey before switching stances multiple times and turning up the pressure in the 3rd round; leading to the TKO victory with under 30 seconds left in the round.

Jeamie TKV (2-0, 1 KO) made a huge statement with a devastating knockout in the very first round of his bout with Jake Darnell.

Pushing Darnell from the very first bell, TKV was able to consistently land shots to both the body and head, wearing down a tough opponent that had only previously been stopped by Olympic medalist Frazer Clarke, before connecting with a destructive 1-2 that rendered his opponent unable to meet the count.

Jeamie TKV has shown he has dynamite power on the big stage and in only his second professional fight, and has put every British heavyweight on notice as a result.

Ebonie Jones (2-0-1) put on an explosive performance on the way to a shut-out victory over 6 rounds, landing clubbing shots from the first to the last round, while also managing the pace and controlling the distance in the quieter portions of the fight.

Jones looked seriously close to getting the stoppage at multiple points across the fight, but Connolly showed toughness and grit to make it the final bell. Ebonie Jones successfully bounced back from a draw in her last fight before tonight, showing why she deserves to be talked about as part of the new generation of British women’s boxing.

Shannon Ryan (2-0) put on a mature performance to cruise to a perfect points victory in her fast-paced fight with Gemma Ruegg, where Ryan walked away a 40-36 winner.

Watford’s Shannon Ryan varied her offense across the fight, firing to the head and body with both hands and countering Ruegg’s shots with perfect timing. Ryan is a seriously exciting upcoming force in women’s boxing and looks set for a star-studded career.