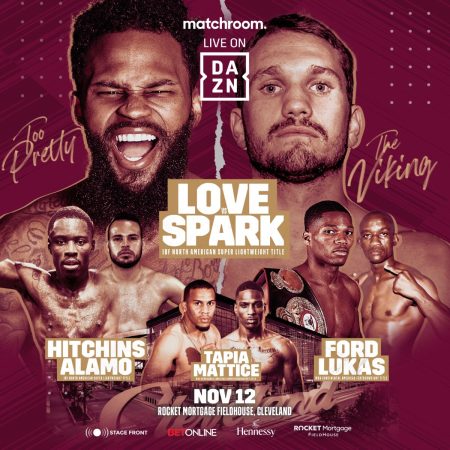 Richardson Hitchins will fight for his first pro title when he takes on Yomar Alamo for the IBF North American Super-Lightweight title and is the co-main event as Montana Love headlines in his hometown for the first time as he takes on Steve Spark for the WBA Intercontinental Super-Lightweight title on Saturday November 12 at the Rocket Mortgage FieldHouse in Cleveland, Ohio, live worldwide on DAZN.

TICKETS ARE ON SALE NOW FROM THE ROCKET MORTGAGE FIELDHOUSE WEBSITE

Hitchins (14-0 6 KOs) inked a promotional pact with Eddie Hearn and Matchroom yesterday and wastes no time in his quest to crash into the top ten in the Super-Lightweight rankings and put the big names on notice as he fights for his first title in his 15th pro fight, entering the bout on the back of three impressive wins; dismissing Angel Rodriguez in May inside four rounds to add to convincing ten round victories over Malik Hawkins and former World champion Argenis Mendez

Opposing the 2016 Olympian is Puerto Rico’s Alamo (20-1-1 12 KOs), the 27 year old is no stranger to title action having recently held the WBO Latino crown to go with his time holding the WBO NABO, WBC Youth and WBC FECARBOX belts, and ‘The Magic’ will be out to spoil Hitchins’ bow under Hearn and bounce back from a slender split decision loss to another new Matchroom signing, Liam Paro, in his last fight in December.

“November 12, my time to shine,” said Hitchins. “Eddie promised me big fights, big opportunities, and most importantly, activity. This is the beginning of all that, the beginning of this new journey in my career and I couldn’t be more excited.

“Alamo is a very tough opponent, and I know he’s coming to win, but he’s simply a roadblock towards achieving my championship goals. As I’ve said before, I believe I’m the best 140 pounder in the world, and he’s going to find that out as soon as the bell rings. I plan on stealing the show November 12. I promise you; you don’t want to miss it.”

“It’s a good fight,” said Alamo. “I’m looking to jump back in the rankings and get a better shot. It will be my first time fighting in Cleveland and I am happy to be fighting in a city where I have a lot of love and support. I’m training at my best to give 100 per cent and to win in style.”

Raymond Ford (12-0-1 6 KOs) continues to catch the eye in his rise in the Featherweight division and defends his WBA Continental Americas title in Cleveland against Sakaria Lukas. The New Jersey talent landed that title against the unbeaten Edward Vazquez in February via split decision and defended it with a shutout win over Richard Medina in June, taking another ‘0’ in the process.

Lukas (25-1-1 17 KOs) is the latest man to try to claim the strap from Ford, and the Namibian has familiarized himself with fighting outside his homeland in his last four fights. The 38 year old had only boxed once outside Namibia in his first 23 fights – with that bout taking him to Zimbabwe – but his last four outings has seen fights in Texas and Atlantic City either side of a pair of bouts in Cancun, Mexico, and now he’ll look to hand a first defeat to the 23 year old ‘Savage’.

“I’m stepping up again, I don’t duck any challenge,” said Ford. “Lukas has only lost once in 27 fights. I’m fighting to impress my fans and I see myself hurting him and being the first person to stop him.

“Then, I’m coming after any of the Champions out there because there’s no fun and games anymore, I want those belts.”

“This is my third fight in the USA and I’m not here to be robbed!” said Lukas. “This boy Ford won’t see the final bell; he will just see me standing over him”

There’s more Puerto Rican action on the card and this time against a local favorite, as Christian Tapia takes on Cleveland’s Thomas Mattice for the WBA Continental Americas Super-Featherweight title.

Unbeaten Tapia (15-0 12 KOs) picked up the title in March with a wide points win over Luis Lebron in Philadelphia, and kept busy in the same city with an eight round win over Mario Lozano, and now faces local man Mattice (19-3-1 15 KOs), who enters the bout on the back of two wins inside the distance, with a first round KO in May in Cleveland Heights and an sixth round stoppage in Toledo.

“The Super-Featherweight division just got a little more interesting now,” said Tapia. “Matchroom has given me a global platform and I intend to take full advantage of it. On November 12 in Cleveland, I’m going showcase my skills, showing the 130lb division, showing the people watching and most of all show my opponent why I am the best kept secret in boxing. El Hijo Del Pueblo (The Son of the People) will not only be victorious but all ‘contenders’ in MY division will be put on notice.”

“This is one of the opportunities I’ve been looking for,” said Mattice. Being in my hometown makes it even better. I will be ready and victorious on November 12.”