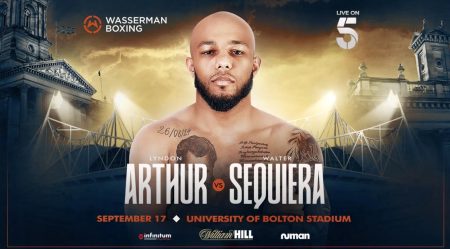 Boxing comes to Greater Manchester this Saturday 17 September, when ‘King’ Lyndon Arthur (19-1, 13 KOs) returns to put his name into title contention once again by making a statement against Walter Gabriel Sequeira (25-9-1) at The University of Bolton Stadium.

Coming to bring the heat, “Trojan” Troy Williamson (18-0-1, 13 KOs) will be looking to pass the test and set up a massive North East fight, whilst British champion Gavin Gwynne (15-2, 3 KOs) looks to retain his beloved lightweight title against Craig Woodruff (12-6, 4 KOs) as part of a huge night of free-to-air boxing live on Channel 5 from 9:30pm.

To mention Manchester boxing in a sentence without the addition of Ricky ‘The Hitman’ Hatton would be like breathing without air. Former holder of the IBF, IBO, WBA and The Ring Light Welterweight belts, alongside his WBA Welterweight title, mark him and his achievements down as one of British boxing’s greatest ever careers.

Born at Stepping Hill Hospital in Stockport, Hatton would go on to proudly succeed whilst flying the flag for his city. Notoriously followed with his army of supporters, it is not only fighting for the people, but being one of the people, that makes you a Manchester fighter.

“Manchester’s always been a great fighting city, even before Ricky Hatton came along. You know we had Carl Thompson who was the world cruiserweight champion. We had Steve ‘The Viking’ Foster from Salford who was the Commonwealth champion, and fought Winky Wright for the world title, just as Ensley Bingham did who was the British light-middleweight champion,” said Hatton.

“I think if you look at all the boxers from Manchester then you see they’re all good people. Down to Earth people, no arrogance in them either, because they wouldn’t relate or get the support from the people of Manchester. We turn out so many great fighters, and that’s why we’ve always had some so much great support.”

That support lead Hatton on to fight the greatest of fighters in one of the division’s toughest eras. Things didn’t quite go to plan against Floyd ‘Money’ Mayweather, but it gave ‘The Hitman’ the opportunity to bounce back and go on to beat Juan Lazcano straight away.

Manchester’s Lyndon Arthur suffered his first loss last time out, as his second fight with Anthony Yarde resulted in the score standing at one win each. Hatton believes that getting back into action is exactly what Arthur needs to reach his potential at hitting the highest of heights in the sport, starting this Saturday live on Channel 5 from 9:30pm.

“Lyndon is world class and just needs to go into this fight remembering that. Yes he suffered a loss against a good opponent, that’s boxing, but now he can move on and start challenging for those big names and titles,” said Hatton.

“When you’re knocking everybody out comfortably, and everyone’s shaking your hand, things can be a bit too easy at times. Legacies are built on bouncing back from defeat, and I believe Lyndon’s got all the attributes to not only bounce back but propel forwards at a greater speed.”

Wasserman Boxing presents Lyndon Arthur’s (19-1, 13 KOs) explosive return to the squared circle as he looks to tame the tough Argentine, Walter Gabriel Sequeira (25-9-1) at Light Heavyweight. A fiery all-Welsh British Lightweight title affair will also feature between current champion Gavin Gwynne (15-2, 3 KOs) and Newport’s Craig Woodruff (12-6, 4 KOs), as well as “Trojan” Troy Williamson (18-0-1, 13 KOs) putting on the battle armour as part of a huge night of free-to-air boxing on Saturday September 17 at the University of Bolton Stadium, live on Channel 5 from 9:30pm.