Ricky Hatton: She’s going to race through the rankings 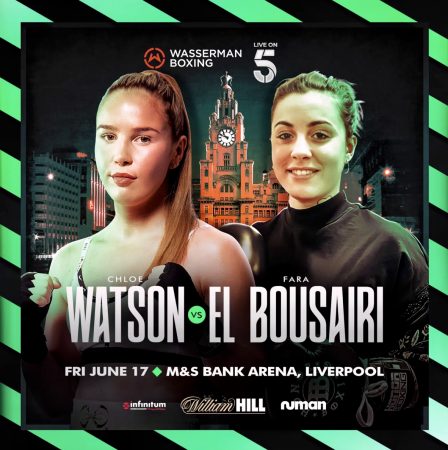 Ricky Hatton, the 43-year-old former Light-Welterweight champion, has been overseeing the development of Birkenhead’s undefeated Chloe Watson (2-0) as she prepares for her upcoming fight against Fara El Bousairi (5-2, 1 KO). The bout will be a homecoming for Watson as she performs in front of her home city, and a free-to-air audience live on Channel 5.

In other sporting contexts you’ll seldom find Manchester and Liverpool as a match made in heaven. Hatton and Watson have broken that taboo and are both singing from the same hymn sheet as she continues to progress at a rapid rate, much to the delight of her coach.

“She’s improving all the time. It’s a pleasure to come to work every day with a talent such as Chloe, and she’s getting better all the time,” he said.

“The most exciting thing as a coach working with her is that I don’t think we’ve even scraped the surface yet. You could see from day one that she had the talent with the amateur pedigree that she had, but she’s transformed that talent right into the pro game.”

There’s a great amount of excitement that surrounds a fighter performing in their home city, and Hatton is no stranger to the pressures and privileges of fighting in your own back yard. Having proudly boasted a 48-fight career, 17 of these have been in Manchester.

Liverpool has the possibility of birthing a new star in 22-year-old Watson and using her home city as a fortress is a prospect that Hatton likes the sound. Not only will the roar of the crowd spur her on, but it will also be an opportunity to add more to her ever-growing fanbase.

“It’s very important, I hope she has more fights on a regular basis in her hometown. Wasserman are doing a fantastic job with her anyway, but I always felt that fighting regularly in your hometown helps that fan base,” he said.

“Chloe has an exceptional fan base through what she has done as an amateur, and what she’s done in the early stages of her pro career. That fan base has got quite healthy suddenly, straight away, and I think once she has a few fights in her hometown she’ll go through the roof.”

The momentum that Watson has already gathered reflects the strong performances that have kicked off her early professional career. This Liverpool homecoming is arguably coming at the perfect time, as she prepares to put on a big performance having taken to professional boxing so naturally.

“The talent she has was obviously there to work with, and to be honest with you, when she first came down to the gym she had a bit of a professional boxing style already. She was good on her feet, very rhythmic, good movement, and her judging of distance was there,” said Hatton.

“Now she’s holding her feet a little bit more, coming back with two and three attacks and getting leverage and power in her shots. She’s added more to her game, sitting down on her punches, changing the angles and stuff like that; and that will just improve more and more as time goes by.”

With progression comes a step up in competition, and Spain’s Fara El Bousairi certainly meets the criteria. A fighter that the Watson camp have studied thoroughly throughout the camp, and remain fully aware of her strong record and potential threats.

Hatton remains keen to maintain a steady pace during the rise of his fighter however, and feels no need for any immediate rush to propel Watson to the top. This fight is a necessary challenge for her still, and it is a fight that they would not have accepted without having complete faith in the Liverpool fighter doing the business.

“This opponent has got a winning record, she’s very, very capable. I don’t think I’d have stepped her up if I didn’t think she was ready for it,” said Hatton.

“I think the way she’s handled the first few fights has shown what ability she’s got. I think the hardest thing will be for us to hold Chloe back because I think she’s going to race through the boxing rankings the way she’s been developing in the gym, and how she’s transferring that from the gym into her fights.

“I think she’s going to shine again, and I think the most important thing is she keeps shining and keeps shining. I know I’ve picked this one but it’s also my job, and Team Wasserman’s job as we’re all one team, that even though she’s improving like she is we don’t necessarily need to floor it at this stage.”