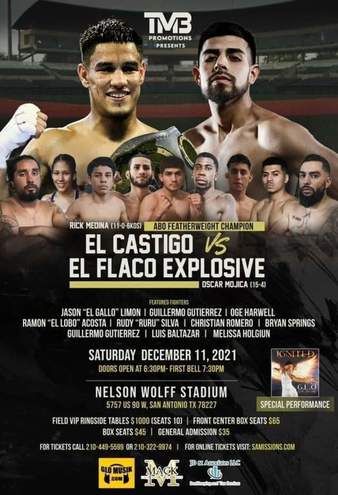 “This is the toughest fight of my career, Mojica defeated Paddy Barnes, a very good fighter, and I have to be ready for everything that he is willing to bring” said Medina, who was born and raised in San Antonio. “This is the battle of Texas. He is from Dallas, I am from San Antonio, this is no different than a Spurs-Mavericks play-off game, and just like the Spurs, I will come out victorious.”

“This is a great fight for Medina who has been waiting for a great chance to get a fight against a quality opponent,” said Greg Hannely, president of Prince Ranch Boxing, who manages Medina. “Rick Morones has done a great job building Medina in the local market and his support in San Antonio is tremendous. Now the stage is set for him to perform.”

“Medina has spent his whole career here and now it is time to get him into the interesting bouts,” said promoter Rick Morones, of TMB Promotions. “We want him to face the type of opponents who will get him ready for world champions, and Mojica is just that. This a great fight and I am excited to see Medina perform in front of all his hometown fans.”

“I’m expecting to see a lot of familiar faces in the crowd this Saturday,” Medina concluded. “Anytime I’m fighting in front of my hometown crowd, it’s a must that I perform at my best ability. I’m hoping I can end this fight early with a knockout, but I’m prepared to go the distance if need be.”