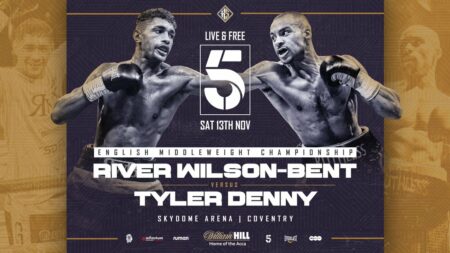 Big-hitter River Wilson Bent can’t wait to prove Coventry is anything but a Ghost Town by lifting the English title in the hometown of iconic band The Specials.

The marauding middleweight takes on Tyler Denny for the vacant 160 pound title at the Coventry Skydome Arena on Saturday, November 13, on the Hennessy All-Stars show, live and free on Channel 5

Bent’s showdown with Denny will be the 11th fight of his pro career but he knows winning the English belt will shoot him straight up Britain’s boxing charts like The Specials who recently hit number two in the vinyl albums chart with Protest Songs 1924-2012.

The legendary band from Coventry created the culturally ground-breaking 2-Tone sound, produced two number one hits and have recently finished touring more than 40 years after changing the British music scene with their unique blend of ska and punk music.

Exhall’s Bent, the former Midlands Area Champion, said: “I’ve lived in Coventry all my life and boxing hasn’t been thriving for a while, but it is now. I don’t think we’ve had that since people like Neil Simpson and Dean Pithie.

“But we are getting a new generation coming through and I am making the first stamp. The English title is the perfect step towards the British.

“I walk into one of the football songs, In Our Coventry Homes and We Live and Die in These Towns by another Coventry band, The Enemy, but I might do a little edit, who knows.

“Everyone in Coventry knows The Specials and what they’ve done. They all still talk about them and even the younger generations like me, know this is the home of 2-Tone. I don’t mind a bit of it, either.

“There will be a brilliant atmosphere at the Skydome. Expect fireworks. It will be like the city at 2the moment, buzzing.

“As for that one song, that was about the old Coventry. It’s nothing like that now. Coventry is no Ghost Town, I’m telling you!”

But with a huge home support behind him the 27-year-old expects to be much too young and have too much for his foe as he looks to do what The Specials last did in 1989 and reach number one in the UK.

He added: “Tyler boxed for the English title twice now and has lost both times, so it is going to be third time unlucky for him. It’s his last chance to get anywhere, so he will give it his all.

“This will move me in the right direction. I could’ve gone for one of those international belts but really I am chasing the British, so the English and win this and hopefully I become the mandatory.

“That’s the next step on my ladder so this is a very, very important fight. And I am going to win it.”