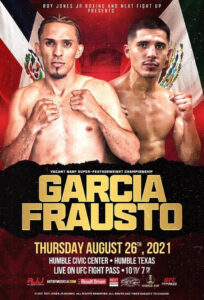 The next installment of the popular RJJ Boxing on UFC FIGHT PASS® series will be held Thursday night, August 26th at Humble Civic Center in Humble, Texas. RJJ Boxing’s last scheduled event this past July 29th in Mexico was canceled due to COVID-19 issues.

The Aug. 26th show is presented by Roy Jones Jr. (RJJ) Boxing in association with Next Up Fight and the World Cup Boxing Series.

The 27-year-old Garcia was born in the Dominican Republic and lives and trains in Houston. His most impressive victory to date is a fourth-round knockout of 30-14 William Gonzalez.

Born in Fresno, California, Frausto fights out of La Marque, Texas, which is less than 50 miles from Houston. Frausto is 3-0-1 since suffering his lone loss as a pro back in 2018.

“We’re excited to be promoting back in the United States,” RJJ Boxing CEO and co-founder Keith Veltre said. “Putting on quality shows during the pandemic has been challenging to say the least. We did promote a couple of shows in Biloxi (Mississippi), but most of our shows have been held in Mexico. We’re grateful to our promotional partners and the Humble Civic Center for giving us this opportunity. Our show will showcase some of the best, young fighters in Texas, starting with our terrific main event for the NABF super featherweight between Eridson Garcia and Armando Frausto.”

Born in Detroit, Houston super middleweight Harris has solid wins against Chris Chatman and Lanardo Tyner on his resume, while St. Louis’ Alexander is the brother of 3-time, 2-division World champion Devon Alexander.