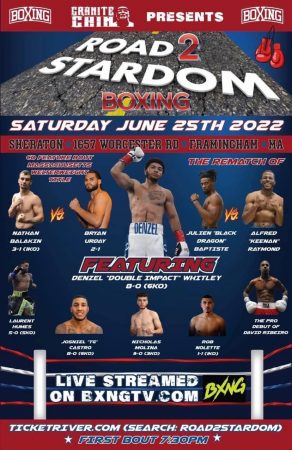 The Massachusetts welterweight title fight this Saturday night between Dracut’s Nathan Balakin (3-1, 1 KO) and Bryan Urday (2-1), of Attleboro, could steal the show on the “Road 2 Stardom” card, presented by Granite Chin Promotions, at the Sheraton Hotel in Framingham, Massachusetts.

The first doubleheader in Massachusetts’ long professional boxing history, “Road 2 Stardom” will be available to watch day and night via live stream at BXNGTV.COM for only $24.99.

It’s fairly unusual for two fighters with a combined record of 5-2 (1 KO) for a title, but styles make fights, especially in club shows, and Balakin vs. Urday has legitimate potential to be Fight of the Night on the evening portion of the “Road 2 Stardom” doubleheader, for the vacant Massachusetts Welterweight Championship as the 6-round co-featured event.

“Both of these guys come to fight,” Granite Chin president Chris Traietti said. “Once the chance to make this fight was presented, I went with it right away. Despite only a few fights each, both had extensive amateur careers, and this is in my eyes a pick ‘em type of fight.”

The 28-year-old Balakin, a Lowell (MA) native fighting out of nearby Dracut, started boxing at the age of 20, turning pro last year. He was the 2017 Central New England Golden Gloves runner-up as an amateur.

“I always wanted and dreamed of turning pro,” Balakin explained. “I can hit but I took a step backwards when Covid shut things down. Carlos Molina, who is fighting Saturday, was the only boxer other than me training at the West End Gym. Manny Farley was training Carlos and being the only other fighter there, he asked me if I wanted to turn pro and he became my trainer.

“I wrestled in high school and also played football and lacrosse, so I had a knack for physical sports, and my grandfather and uncle boxed. My uncle sparred with Mickey Ward, and he introduced us.”

Balakin is coming off a disappointing loss this past January to Kevin Walsh by way of a unanimous 6-round unanimous decision in New Hampshire.

“Kevin Walsh is good but I’m better than I showed in our fight,” Balakin said. “I didn’t fight my fight. My first three opponents weren’t great, so my last fight was different, like jumping from amateurs to pros. I walked through my first three opponents. It was tough losing, but I learned a lot. I need to be smarter and more elusive. This fight is a huge opportunity for me. The Massachusetts welterweight title has been vacant for a long time.”

Urday, 30, is excited to be fighting for the Mass. title as well. He is a self-proclaimed gym rat who was born in Brockton and lives in nearby Attleboro. Urday graduated from Bridgewater State College, majoring in criminal justice, but he works as a sheet metal worker (Local Union 17 A).

“I want to win this belt and go as far as it’ll take me,” Urday commented. “This is a step up for me. I’m from Brockton and, of course, I know all about Marvin Hagler and Rocky Marciano. I have a good fan base from the Brockton area, and I moved to Attleboro three years ago.

“I work hard at the gym and do whatever it takes. I train at the same gym as Dave Ribeiro, who is fighting on the same card. Hats off to my opponent. I know he’s training hard, too.” 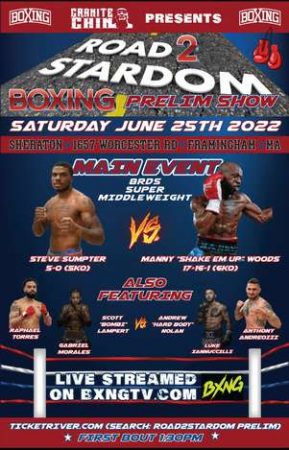 Undefeated welterweight prospect Denzel “Double Impact” Whitley (8-0, 6 KOs), fighting out of Pittsfield (MA), headlines for the first time in the 6-round main event on the evening card against Maycon Oller Da Silva (1-4, 1 KO).

Also fighting at night is undefeated Floridian welterweight Josniel “TG” Castro (8-0, 6 KOs) against Bryan Goldsby (5-16) in a 6-round bout.

The evening card opens with a 4-round fight between Providence junior middleweight Rob “The Golden Child” Nolette (1-1, 1 KO) and DeWayne Wisdom (7-61, 3 KOs).

Sumpter’s older brother, heavyweight Quintin (4-0, 3 KOs), will be fighting on the same card with his brother for the first time in the Bay State, Quintin is matched against his first scheduled 6-round bout versus Tracey “The Titan” Johnson (4-10-6, 0 KOs), the brother of world champion Demetrius “Boo Boo” Andrade.