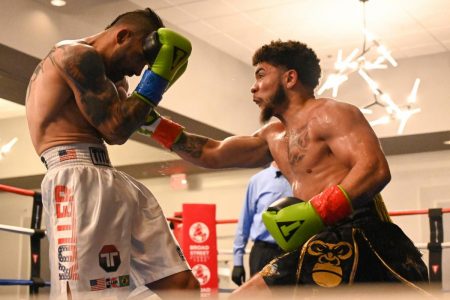 All the action was streamed live and exclusively on BXNGTV.com.

“I’m very happy with our show,” Granite Chin president Chris Traietti said. “Any chance to have my guys fighting on the same card, I jump on it. I’m one of most innovative promoters in New England. I like to do different things. Any company needs to evolve and be creative. We experienced doubleheaders in New Hampshire and brought it here (Mass.). It’s very likely that you’ll see Granite Chin doubleheaders on a regular basis. I’m setting the standard!”

In the evening card’s main event, rising welterweight prospect Denzel “Double Impact” Whitley (8-0, 6 KOs) methodically and thoroughly outboxed upset-minded Maycon Oller Da Silva on his way to career win No. 9 without a loss, by way of a one-sided 6-round decision (59-54 X 3).

After a “feeling out” first round, Whitley came out in the second controlling the pace, landing some sweet combinations on his much taller opponent’s head and body. Whitley showed his high ring IQ, poise and solid all-around skills in the third as he started breaking down Silva, who had been  dropped only seconds before the end of the second round by a sneaky right. Whitley’s dominance continued, whether he counter punched or led, right to the end of the fight. Whitley, who was unmarked, won all six rounds on the three judges’ scorecards.

Billed as a potential Fight of the Night, the co-featured event more than lived up to its pre-fight billing, as Bryan “Mex” Urday (2-1, 0 KOs) and “Nasty” Nate Balakin (3-1, 1 KO) stood toe-to-toe in the middle of the ring, trading punishing shots from the opening bell to the end. Urday seemed to take control in the fourth when he clipped Balakin with an overhand right that temporarily turned the tide, but the equally tough Balakin came back strong in the same frame.

The back-and-forth momentum continued as both fighters left everything in the ring, somehow neither fighter showing signs of tiring, and Urday was awarded a 6-round unanimous decision (59-55, 58-56 X 2) for the vacant Massachusetts Welterweight Championship.

Constantly developing welterweight Josniel “TG” Castro (9-0, 7 KOs) blasted out Bryan Goldsby (5-17) in the opening round, hurting Goldsby with each punch he connected with until he ended the bout a little more than one minute into round one. Goldsby landed on the mat and referee Tom Clark had seen enough.

Welterweight Nicholas “Saint Nick” Molina (10-0, 4 KOs) kept his unblemished record intact with a stunning second-round stoppage of Argentinian Jose “El Chino” Aubel (8-11, 7 KOs). Aubel started clowning around in the ring and Molina made him pay for it almost immediately, snapping a straight right that sent Aubel to the canvas. Referee Melissa Kelley stopped the fight after looking in Aubel’s eyes.

2020 New England Golden Gloves Champion David Ribeiro (1-0, 1 KO) had an impressive pro debut, dropping welterweight Rakim Johnson four times en route to a second-round technical knockout. Fighting out of the City of Champions, Brockton (MA), Ribeiro displayed his full arsenal, effectively using both hands from various angles to deck Johnson three times in the opening round, once in the second, after which referee Tom Clark waved off the fight.

In a rematch of a fight last November, Julien “Black Dragon” Baptiste (4-2, 2 KOs) avenged a loss by 4-round split decision, taking a 6-round unanimous decision in a very competitive match. Neither fighter was hurt in a fight that was difficult to score due to its on-and-off action.

The first fight of the evening card produced an upset as DeWayne Wisdom (8-61, 3 KOs) won for the first time since 2017, snapping a 25-fight losing streak, by stopping junior middleweight Rob “The Golden Child” Nolette (1-2, 1 KO) in the second round. Wisdom caught Nolette with a good right and Nolette hit the deck as referee Clark halted the fight.

Fighting in his first main event, as well as his first scheduled 8-rounder, super middleweight Steve Sumpter (6-0, 6 KOs) needed rounds but opponent Manny “Shake Em’ Up” Woods (17-17-1, 6 KOs) didn’t cooperate as Sumpter took Woods’ soul with some masterful boxing and power punching. Woods went down twice in the second, once in the third, and referee Paul Casey ended the fight in the fourth with Sumpter pounding Woods on the ropes.

Hometown favorite Raphael Torres (1-0, 1 KO), fighting out of Framingham, destroyed cruiserweight Igor Pessoa (0-2) in the co-featured event. Torres damaged Pessoa with a strong right to the temple, putting him on the canvas, and Pessoa never really recovered. Seconds later, Torres connected with a right to the top of the head, Pessoa went down again, and counted out midway through the opening round.

Florida light heavyweight Carlos Arredondo (3-0, 3 KOs) pounded Michael Medeiros (0-2), who hit the deck from an overhand right that put Medeiros down in round one, and out for good in round two for a technical knockout.

Undefeated Gabriel “Menace” Morales (4-0, 2 KOs) certainly lived up to his nickname, throwing crisp combinations in bunches against Issac Haynes (0-2). Sixteen unanswered punches, mostly to the body, nearly ended the fight in the opening round, but Haynes survived, at least until the following round, in which Morales landed six head shots resulting in referee Casey jumping in to stop the fight.

Heavyweight hopeful Quintin Sumpter (5-0, 4 KOs) – Steve’s older brother – outclassed journeyman Tracey “The Titan” Johnson (4-11-6, 0 KOs), dropping Johnson with a right hook at the end of round one. Sumpter broke through Johnson’s high peekaboo-like defense and in the fourth round of this entertaining bout, Sumpter blasted Johnson with a powerful right that hurt Johnson and referee Marcel Varela immediately waved off the fight for a 2nd round TKO victory for the continually improving Sumpter.

Flying out his corner like he was shot out of a cannon, junior middleweight Luke Iannuccilli (2-0, 2 KOs) fired punches from all angles, trapping Robert Bricks (0-11) on the ropes right off the opening bell, unloading a barrage of sizzling, rapid-fire punches until Bricks moved. But Iannuccilli caught him on the ropes again, connecting with some badly intended punches, until Bricks took a knee. Referee Ryan halted the bout at the 56-second mark of round one when he didn’t like how Bricks responded for a technical knockout.

Junior middleweight Anthony “The Gentle Savage” Andreozzi (3-2, 1 KO) opened the doubleheader with a 4-round unanimous decision over veteran Rynell Griffin (8-53-2, 2 KOs) in a spirited fight between dueling southpaws.