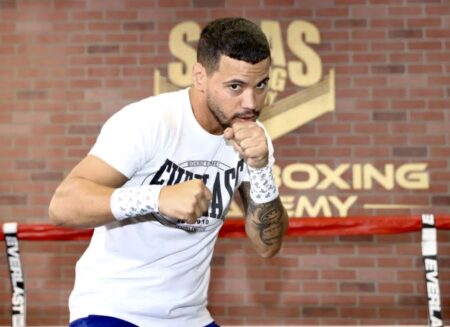 Two-time Olympic gold medalist Robeisy “El Tren” Ramirez, the southpaw fighting pride of Cienfuegos, Cuba, is on the precipice of a featherweight title shot. In order to earn that opportunity, Ramirez (10-1, 6 KOs) will have to take care of business against former world champion Jessie Magdaleno (29-1, 18 KOs) in a 10-rounder Saturday, Oct. 29 at Hulu Theater at Madison Square Garden.

Ramirez-Magdaleno is the co-feature to the Vasiliy Lomachenko-Jamaine Ortiz main event, streaming live and exclusively in the U.S. on ESPN+.

Ramirez has won 10 straight fights since losing his August 2019 pro debut. He linked up with Cuban trainer Ismael Salas in Las Vegas and has lived up to his nickname in recent fights. Ramirez began his 2022 campaign in February with a third-round stoppage over Irish veteran Eric Donovan. Less than four months later, he knocked out then-unbeaten contender Abraham Nova with a left hand. Ramirez now hopes to add a marquee name to his résumé in Magdaleno, who has won four bouts since losing his world title to Isaac Dogboe.

From his Las Vegas training camp, this is what Ramirez had to say:

“It has been an excellent training camp under the guidance of Ismael Salas. He has drawn out a strategy and roadmap for success. It is now up to me to execute it and make it clear to all that “El Tren” is the true powerhouse of the featherweight division.”

“I’m as fast, strong, and smart in the ring as anyone in the featherweight division. On October 29, I will show the world that it is only a matter of time before I become a world champion.”

“Magdaleno is a formidable opponent, a former world champion. While he deserves my respect, he needs to understand he is going up against a TRAIN. I see this fight as an opportunity to take a big leap in my quest to earn my first world title and eventually become king of the featherweight division.”