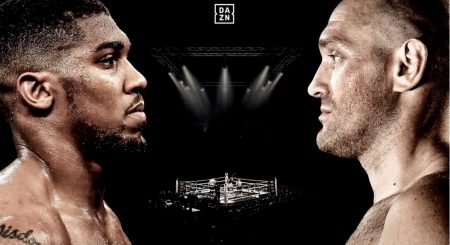 Anthony Joshua’s team agreed the terms for a huge fight with Tyson Fury for December 3rd, and Robert García, AJ’s trainer says that he has been in touch with Joshua’s handlers about the ongoing negotiations, but he would have liked two or three fights for AJ before fasting Tyson Fury.

García revealed that he has been speaking to Anthony Joshua’s team after their defeat against Usyk, but has not had a conversation with the fighter himself. Garcia is aware of the ongoing negotiations to stage the fight between Joshua and Fury in December, but he is not participating in the decision process.

“Yes I have talked with the (Joshua’s team)”, Robert García told IZQUIERDAZO in an exclusive interview. “But I’m the newest member of the team, and those are decisions that need to be taken among them”.

Less than four months after back to back defeats from Anthony Joshua with Usyk, AJ is willing to fight with Usyk. Robert García feels that, in his opinion, two or three fights for AJ before facing Tyson Fury would have been a great choice.

“In my opinion, I would have liked two or three fights (before Fury)”, García explained. “But obviously, this is business, and a huge fight in Europe. I can’t stop them from accepting that, if it’s a massive fight, and the purse would many, many, many money”.

As the newest member of the Joshua’s team, Robert García is aware that AJ’s decision is not in his hands, because the people around AJ are very smart, and will make the best decision”.

“Im the newest member of the team”, said Robert. “Those decisions don’t belong to me. He has a very smart management team, and will take the right choice. In reality, he decision is theirs to take”

Last week, Tyson Fury seemed to be issuing a deadline for Joshua’s to accept the fight for December 3rd. And according to last reports, Joshua’s tram has accepted all the terms for the fifth with the WBC title holder.

Robert Garcia was thinking that the pressure that Fury applied to Joshua to make his mind up had another intention: get leverage for Usyk to take the unification fight. Robert García explains that, indeed, he has been speaking with Joshua’s team in the last hours about the status of the negotiation.

“Deadline? We haven’t talked about a deadline to get the fight done between Joshua and Fury”, Robert explained. “For me, if you want my opinion, I think that Fury is doing all this to put pressure on Usyk and make the unification. It’s a massive fight. Fury began to talk, and yes, he has talked with Joshua’s team, because they told me. But it can be part of the strategy to push Usyk to make him think that he is losing his chance”.

And Robert Garcia insists in his plan to make Anthony Joshua prepare in his gym in California. However, García doesn’t rule out traveling again to England to be back as AJ trainer.