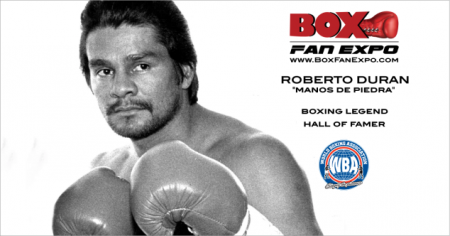 Boxing Legend and Hall of Famer Roberto Duran has confirmed that he will appear alongside the “WBA” at the Sixth Annual Box Fan Expo on Saturday, September 17, 2022, at the Las Vegas Convention Center from 10 a.m. to 5 p.m. The Expo will also coincide with the mega trilogy fight between Canelo Alvarez vs Gennady Golovkin, that will take place later that evening at the T-Mobile Arena.

Duran will hold a Meet & Greet with his fans at the “WBA” World Boxing Association booth during the fan event held over the Mexican Independence Day weekend.

Duran will make his second appearance at this years’ Expo and will be signing gloves, photos, personal items and memorabilia. Boxing Fans will have an opportunity to take pictures with this boxing legend also known as “Manos De Piedra” (“Hands of Stone”) and also purchase Merchandise from the WBA booth.

Roberto Duran, a true legend of the sport is widely regarded as one of the greatest boxers of all time. He was inducted into the International Boxing Hall of Fame on June 10th, 2007. A versatile brawler in the ring, he was nicknamed “Manos de Piedra” (“Hands of Stone“) during his career. In 2002, he was chosen by The Ring to be the fifth greatest fighter of the last 80 years. The Associated Press voted Duran as the #1 lightweight of the 20th century. Many even consider him the greatest lightweight of all time. He held world titles at four different weights – lightweight (1972–79), welterweight (1980), light middleweight (1983–84) and middleweight (1989). He was the second boxer to have fought a span of five decades, the first being Jack Johnson.