Roberto Sosa Pichardo: “General” Cuellar is an example for the youth 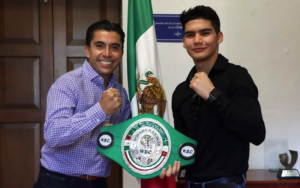 The fighter from Promociones del Pueblo, directed by Oswaldo Küchle, met with the Mayor of Corregidora, Roberto Sosa Pichardo, who took the opportunity to reiterate his support and wish him more successes in his professional boxing career in which he will surely make his town even more  proud.

The road has not been easy for the boxer of Corregidora, Querétaro; who since his debut at the age of 16 has shown a discipline and determination worthy of admiration, becoming an example.

Cuéllar Contreras has an undefeated record of 19 victories with 12 of them via KO; during the meeting, Cuellar reaffirmed his commitment to continue working with redoubled commitment and to be willing to collaborate so that Corregidora continues to stand out as a municipality of successful athletes.