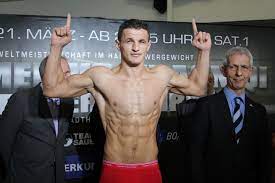 Robin Krasniqi and Dominic Bösel  will step into the ring on Saturday at the GETEC Arena in Magdeburg, Germany, for their World Boxing Association (WBA) light heavyweight eliminator fight.

The bout will be a rematch after Krasniqi knocked out Bösel in one of the 2020 upsets during last October.

Krasniqi, 31, became interim champion of the division, but his title was vacated due to a ruling in favor of the WBA world title reduction plan. The Kosovo native, but a German citizen, is ranked number one by the pioneer body and wants to earn the right to be the mandatory challenger in this showdown.

Bösel, 34 years old and also German, has stressed that he wants to take revenge and that is why he will face Krasniqi immediately. With eleven months off, he says he is ready to take on the challenge and turn the tables after succumbing to the power of his opponent last year.