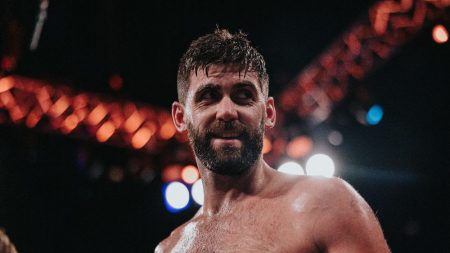 Rocky Fielding says fighting Saul ‘Canelo’ Alvarez is as mentally punishing as it is physically.

Liverpool’s Fielding put his WBA world super middleweight title on the line against the Mexican in December 2018 in New York, but Canelo was in destructive mood at Madison Square Garden that night and stopped Rocky inside three rounds.

Probellum fighter Fielding recalls the relentless “pressure” and “presence” of Alvarez and knows he was taught some valuable lessons about fighting at the very highest level of the sport.

And the 35-year-old is backing Canelo to come out on top in his trilogy clash with Gennady Golovkin this weekend.

“This was my first experience of fighting at that level,” Fielding told Probellum.com.

“And with Canelo, it was all about his front foot control and wherever you were in the ring, he could cut you off.  It was also like he was there before you.  He brought that pressure and that presence.

“At that level you must put your shots together at the right time and there is absolutely no switching off.  At the levels below, you can get away with mistakes but not against him.

“I did catch Canelo but he just shook it off and I thought to myself: ‘Bloody hell, it’s only the second round!’

“The first body shot he caught me with was like a swipe across the stomach which, in sparring, you would normally take.”

Canelo was moving up from middleweight to challenge Fielding, having beaten Golovkin in a rematch earlier in the year.

“I knew it was going to be tough night; he was coming up in weight and was fresh and strong,” he added.

“There was a 10lbs dehydration clause in the contract and while I wouldn’t normally put on much more weight than that, mentally it was a bit of a challenge because for the first time, I stepped off the scales and was having to think about how much I was putting in my body.

Canelo and Golovkin controversially drew their first fight before the Mexican was given the nod in the rematch.

Fielding expects another entertaining fight but believes the younger Alvarez, who is undisputed super middleweight champion, to prevail.

“It will be a good fight, but I think Canelo has the better speed, reflexes and shot selection.

“Golovkin still carries his punch power, but Canelo has taken it over the course of two fights.  From round four, I expect them to stand in the middle of the ring and have it, with Canelo winning on points.”

Leon Bunn vs. Padraig McCrory on Oct. 22 in Frankfurt for IBO Title Mauricio Lara: We will see if the injury is real or a lie