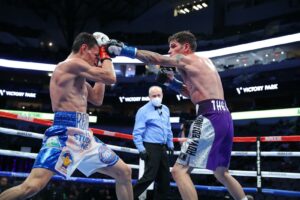 Roger Gutierrez will defend his WBA super featherweight title in a rematch with Rene Alvarado this Saturday at The Ford Center at The Star in Frisco, Texas.

The 29-year-old Venezuelan will make the first defense of his title, which he won by defeating the Nicaraguan in a tough fight on January 2. Gutierrez did not have an easy opponent in the Central American but his power was decisive in knocking him down three times during the fight and earning 113-112 scorecards from the three judges.

It was a nice way to get revenge for Gutierrez, who had lost his unbeaten record to Alvarado in 2017 in a non-title fight. Almost four years later he had the opportunity to face him again and now for the world belt to take revenge.

But Alvarado is a tough fighter and he doesn’t intend for things to stay that way. His ability to adjust details will be put to test and it will depend on that if he becomes champion again this Saturday. The 32-year-old fighter has the necessary experience and has measured himself against strong opponents, he knows what it is like to be world champion, and he intends to regain that status.

This week the various promotional activities will take place prior to the Golden Boy Promotions event and on Friday they will step on the scales to weigh in at the 130-pound division’s weight limit. Gutierrez has a record of 24 wins, 3 losses, 1 draw and 29 knockouts, while Alvarado’s record is 32 wins, 9 losses and 21 fights before the limit.